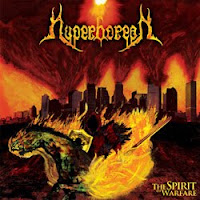 Here we've got a debut album about a decade in the making, from a virtual unknown in the Swedish sphere: Hyperborean. Now, as with most subjects ancient and Greek, the name 'Hyperborean' alone instantly initiates salivation. A few other, small time black metal acts have used the moniker, but if the quality of The Spirit of Warfare is any indication, this is to whom it will inevitable stick. What surprises me about the band is how they manage to write so effectively in this genre with such a clean tone. At first, I was almost uncomfortable with the level of polish, not at all common for this style, but it creates an incredible balance between the hoarse vocals, glazing melodies, stolid drumming and sparse piano accompaniment.

Dissection, Immortal, I and Borknagar are good jumping off points in comparing the tone and writing of The Spirit of Warfare, but not precise parallels. The guitars are configured into patterns that best inspire sorrow and glory, as in the verses to "Weapon Making" or "The Last Stand of Leonidas and the Battle of Thermopylae". Almost without exception, the individual riffs have been meticulously crafted to provide a sensuous, gleaming experience in both the rhythms and leads; the vocals a pendulous, cautionary narrative to the historical battles that have inspired the lyrics. There are, upon occasion, some familiar riffs mixed in to offset those more original, and perhaps we could accuse Hyperborean of laying on the melody a little too thick, but the inclinations they create towards revisiting the material is truly telling. The pianos are enormously glassy and effective, especially in "The Sick Man of Europe", and a delightful affectation dowsed upon the equally reverent guitar lines.

If one thinks of black metal only in terms of enormous, crude distortion and lo-fidelity rebellion, then this debut is not likely to please. For those unopposed to a little grace, a classical influence, a symphonic saturation, The Spirit of Warfare plays out like a galleria of European nobility paving mosaic tributes to a the storied past of their countries. Its not exactly lighthearted: the vocals see fit to spew carnage across the luminous exhilaration, but there is no question of their knack for writing hooks that spin around in your mind, tasteful spikes of melody that flow well into each other like ducts into a central spring. It might often be 'too pretty', and a few of the longer (7-9 minute) pieces might well profit from a trimming of their sugary fat, but it's an experience easy to commit to memory and a tangible exhibition of talent, with several of its constituents ALONE worth the price of attention ("Channeling the Spirit of Warfare", "Weapon Making", "The Last Stand of Leonidas...", "The Sick Man of Europe").