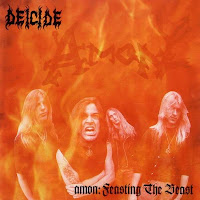 Similar to how Earache had scooped up Morbid Angel's earlier, unreleased demos through the Abominations of Desolation collection, so too would Roadrunner give their Floridian monstrosity Deicide such a treatment. Formerly known as Amon, Benton and the boys were asked to change their name due to its proximity to a King Diamond song title. This is a miserable excuse, really, even if the two shared labels. A fucking song title? Really? Nevertheless, they ended up benefiting from this alteration, because Deicide is indisputably a more provocative, controversial moniker and probably a factor in their considerable success. Amon: Feasting the Beast merely assembles the two demos the band recorded and released under their previous namesake, and offers them to the broader audience who likely never got to hear them unless they were involved in tape trading.

Well, I must say, both Feasting the Beast (1987) and Sacrificial (1989) were incontrovertibly brutal for the period in which they were released, rivaling their Florida peers like Death and Obituary with considerable ease. Most of the material here was re-recorded and released as the band's 1990 debut Deicide, with the one exception of the intro "Feasting the Beast", which is nothing more than some horrific ambient sampling. Feasting the Beast is naturally the more crude of the two old demos as Amon, and the reworked versions are unanimously superior, but I have to confess that Sacrificial sounds amazing. In fact, I like the versions here on this demo more than those put out the following year. The vocals have less rasping, and a more distinctly ominous feel, and the riffing sounds incredible through old standbys "Lunatic of God's Creation", "Sacrificial Suicide", "Carnage in the Temple of the Damned", "and "Blaspherereion".

Truly, it's no wonder that the band were quickly snatched up based on such a recording, and their place in history assured, their dynamic bludgeoning to scare the panties off numerous school teachers, clergymen and groupies alike in the ensuing years. So for that reason alone, and the chance to hear Deicide in their morning star glories, the fan might do well to at least check this out. That said, the earlier demo is not entirely appealing, and its flaws serve to counteract the strengths of Sacrificial. The pair might have been better suited as a bonus disc on the initial release of their sophomore Legion, rather than an independent product like this, but then that would have netted less profit for the label, so it makes sense in this format. At least it serves as a complete precursor to the Deicide name change, even if the only real value here is in exposure to some cleaner historical alternatives to the Deicide (1990) debut that everyone had no doubt already purchased. I bought it because at the time I had no clue what it was, but that was my own fault as I plunked paper route and dish washing profits down on anything I could find in the genre those days. For a fan package, this is not so offensive.