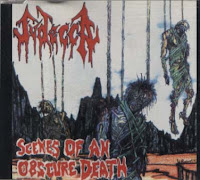 Judecca was one of a number of underground acts picked up through the independent label Wild Rags for wider distribution, and in 1993 they issued a pair of EPs rooted purely within the ghastly concepts of old school death metal. They formed relatively late in the Florida sweepstakes, years after the larger locals, but nonetheless there was something of value here: a credibly effective alternative to the earliest albums of Death, Xecutioner aka Obituary, Autopsy and other US pioneers like Incantation. Scenes of an Obscure Death is an incredibly crude recording, as it was essentially a demo cassette repressed as a CD (with the band's 1992 demo Eternal Rest tacked on as a bonus), but it's still as charming as the corpses strung upon its cover...

Most of the gripes here would naturally revolve around the production aesthetics. The drums are incredibly simplistic and tinny sounding, and they leech potential power from the songs. The guitar tone sounds little more than a cheap amp plugged in with little finish, and the bass plunks along at an often unrecognizable level beneath. These are demos, after all. Yet the songwriting is not at all bad, and beneath the blunt grunted vocals they will often deliver a moment of brutal, subterranean bliss, like the guttural intro to "The Realm" and its doom/death swagger; or the smutty intro and Halloween-like melodies that inaugurates "Unspeakable Acts" with a primal, blustering cheese. A few of the tunes are sheer, grunting neanderthal power: "Left to Die" and the mind sawing "Necrosis", but they're not exactly bristling with riff quality, and even the titles seem to reflect better known peers (Autopsy, Death, etc.).

The three tunes taken from the Eternal Rest demo are even more burgeoning, bullying and noisy, but they still retain a margin of ghoulish charisma for those with no expectations beyond the foul pungency of the upturned grave. Leads, where they are displayed, generally consist of little more than confusion, a few notes being wrung out across the churning fleshscape. Most of the flaws in the drumming are incurred by their reduced volume, but it's unlikely those who fancy the sick bombast behind Morbid Angel or Deicide would appreciated their lewd facade here, and this is possibly one of the reasons the band never broke out of the sub-cellars of the genre's waking years. Scenes of an Obscure Death is all too apt a title for this release, and its permanent underground status is justified by the often lackluster content, but I'd be lying to say that Judecca don't have a few passages here that are fun enough to ignore the mediocrity of the writing...but only if you're in the mood.