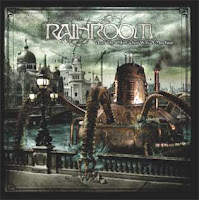 Finland's Rainroom occupies a rather unique niche in doom metal, but then, most of the artists on the Firebox roster do. Performing a fusion of progressive rock, doom and death through extensive compositions between 7-10 minutes in length, they remind me of an alternative Opeth with traces of mid-t0-late 90s Katatonia. There is a talent here for extrapolating simplistic rhythms into hypnotic, solemn patterns, and the Finns are good at exploring the chords and notes they select. Married with an intriguing steampunk aesthetic (in the cover art, titles, and lyrics), And the Other That Was a Machine is a clear step up in curiosity and content over the band's 2006 self-released debut Netherself, so they've put the intervening half decade to good enough use.

There are but five tracks on this release, totaling about 44 minutes, so in this way too it reminds me of earlier Opeth efforts like Morningrise, though Rainroom are replacing the melancholic, naturalist motif with an organic, machine-like quality riven through the guitar tone and the mood captured with even their most primal of chord streams (akin to Brave Murder Day). It's a catchy enough practice, in particular through the earlier cuts "...yeah, Many Machines" and "Abort Engine", but I did feel like the band often struggled with bringing the tracks to the proper level of resonant, emotional of climax. Thus, they tend to feel like very level fields of expression. But there are some cool touches here, like the music box atmosphere of the "Loew Mechanism" intro that cedes into jarring, dark fabric grooving, or the psychedelic, clean wisps of guitar which cut into "Steam Conjecture".

The closer is a taut evocation of sparse longing, "Forms and Facades (or a Dream of an Omniscient Automaton)" which alternates between rhythmic chugging and ringing melodies to create an engrossing, fragmented effect beneath JP Eloranta's growls, like some median between Opeth and Perfect Symmetry-period Fates Warning. Ultimately, while I was impressed by the visuals that the concept of this album brings to mind, and how the musical pallor provides an organic backdrop for the steam-driven wonders of the imagination, I felt like a few of the songs did drag their feet for a few minutes of excess, with little interesting to occur until the inevitable shifts in tempo. Rainroom are a dynamic act, but there could certainly be some more variation applied to this same conceptual space, with almost limitless results. If the band were to continue along this path of inquiry with more memorable, manageable music, then we'd be witness to something unique and fascinating. This sophomore album is worth hearing, but it doesn't always hold up to its promise.