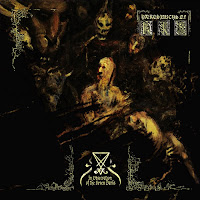 Denuntiatus Cinis, last year's opus from Californian Cernunnos, was an epic and ambitious sprawl of classical overtures, grim ambiance, and traditional Norwegian black metal architecture that sent heads spinning off into hideous oblivion while they attempted to calculate what they had just experienced. It was easily one of my top picks for 2010, and having just recovered from its spectral awnings, I am now faced with the dread of its successor: In Obsecration of the Seven Darks. Now, naturally I'd be a little concerned as to how such a work of depth could so quickly be followed up, and in fact I have not wrung out so much enjoyment and appreciation here as its predecessor, but Hæresiarchs of Dis has nonetheless come through with sufficient complexity and variation to cement its status as a radar blip redolent of the now departed underground heroes Xasthur and Leviathan.

However, I mention these only in comparison as to the scope of vision and the strength of the individual as composer here, because Cernunnos has a notably different approach, distinctly influenced by the sweeping, symphonic black works of Norway and Sweden in the 90s. This is essentially a, spiritual, experimental extension of Emperor's Anthems to the Welkin at Dusk or In the Nightside Eclipse, bringing in a host of outside elements that, as on the debut, are arguably more memorable and intense than the black metal segments. There's even a cover of "Ensorcelled by Khaos" here which affirms my suspicions, lovingly laid out and mutilated into a fascinating if marginal deconstruction of the original. As expected, the album splits its hairs betwixt shorter, ambient or atmospheric pieces and meticulously structured black metal.

The former are best represented by the vocal sobriety of "Onward Through the Oculus" and its dour chants; the theatrical bluster of "Aut Vincere Aut Mori" with its snaking, scorching guitars, cautiously strung cleans and vaunted cathedral arches; the sweeping and roiling "Passage" with its haunted heartbeat, symphonic swells and the uplifting, beautiful tones of its closure; or the unexpected, Gothic cowboy crooning of "Grazioso Drone". Then there are several, similar curves embedded into the longer black metal compositions: like the finale "Dawn" which sounds about the same as the title would infer, or the first two minutes of "Confounded by the Vanquished Coil" which create a suitable, Philip Glass-like escalation from a crackpot din. In all honesty, these make for some of the best listening of the entire album...

Discounting the Emperor cover, there are four metallic rhapsodies populating this paradigm of alienation and escape, led by the titular "In Obsecration of the Seven Darks", an agonizing shuffle of menacing rhythms that is admittedly rather cluttered, if intriguing. The closing sequence is wonderful, with swooshing bass and battering guitars sailing off into a fading choir, but it never escapes its disjointed atmosphere. "Remembrance of He Who Defied God" fares better, with bristling, discordant notation evolved into a frenzy of bitter, streaming melodic passions, with a great thrashing breakdown around 4:30 and some surprisingly dynamic architecture beyond. "Confounded by the Vanquished Coil" is slower, with some spikes of clean vocals and wavelike horns ensnared within its folds; while "Consummation of the Seed" creates a fabric of tumult not unlike something Blut Aus Nord might pull before again erupting into the Norse rush and a catchy Eastern twist at the 2:00 mark.

Much of this is adorned in the ablutions of Cernunnos corrosive saliva, taut snarling executed with brutal conditioning that feels at times like a more full-bodied Ihsahn. As a whole package, it's once again an experience unlike many others you'll hear fielded from the one-man bands populating this spectrum of null colors. There is much attention to detail here, always some unnoticed ambient swill or melody dancing at the edge of your perception, and like the first album, it might take a few plays through to shape itself in your conscience. That said, I did not find Hæresiarchs of Dis so overwhelming this time as I did the last. Not because the element of surprise has been lost, per se, but I didn't find the metal songs quite so effective. This is still intelligent; quite pregnant with the ideas and ideosyncrasies of the debut, some even fresher, but it's mildly less even across the 51 minutes.