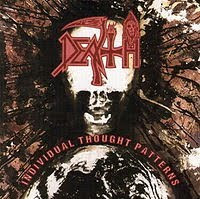 As much as I wish I might have sawed off and cauterized Chuck Schuldiner's legs around 1989, then kept him locked in a basement prison on a diet of human entrails and cheap horror films, there was simply not going to be any looking back for the Florida musician as he set his ambitions and aspirations anew for each full-length effort. That aside, the man definitely worked upon plateaus of creativity, rather than steep peaks and gorges, and the majority of his output consisted of two primary 'trilogies' or phases (excepting The Sound of Perseverance, which I'll likely complain about at great length elsewhere). Individual Thought Patterns represents the 'bridge' edition of the second trilogy, refining the concepts behind Human by extrapolating better songs from their nebulous midst.

Sure, many lavish such praise upon that fourth disc that one might think it was an evolutionary stopgap in human existence, but it takes only a single track from its successor to stifle such a misrepresentation, the all too aptly titled "Overactive Imagination". Here we experience all of the processed sterility of the 'New Death' of the 90s, sculpted into a more durable, memorable pattern of notes alternated between the jerkiness of the verse and the scalding momentum of its transitions. Schuldiner had once again acquired new musicians to help mold his visions: Sean Reinert and Paul Masvidal of Cynic replaced with King Diamond stalwart Andy La Rocque and thrashing thunder god Gene Hoglan (Dark Angel, World Wars I and II, the battle of Ragnarok, etc). Both get to work quite early here, with Hoglan's strength granting the recording a more formidable backbone than Death had ever possessed in the past, and LaRocque's considerable lead skill grafting a warmth and immortality to the solos here that simply crush those of Human.

Retained here: Steve DiGiorgio, who it turns out is the perfect counterweight to the new duo and Chuck's meticulous dynamic sensibility, fingers strutting along the fat strings as if their own existence were dependent on it. From "Overactive Imagination" we shift unto the more glorious "In Human Form" with its arching, credible verse patterns that cede to the most 'death metal' riff on the album at :40, adjoined to a beautiful, eerie solo. So far, Individual Thought Patterns has proven just as enduring as the 1990 effort Spiritual Healing, but will the good fortune hold? Yes and no. For the most part, the material here is heavily front-loaded, and I've long held the first four tracks to be the best of the litter, including the acrobatic variation of "Jealousy" with its thick streams of bass and the majestic climes of the bridge; and the provocative "Trapped in a Corner" for the progressive, spacey fusion burrowed in its depths, very much a reflection of what the band had sought out to achieve with Human.

For the rest, I feel it's quite possible to pick out a few strengths and leave the remainder on the cutting room floor. "The Philosopher" is perhaps the best known of its tracks, having boasted a grim video and a rollicking, rolling mosh ethic in its verse that had limbs flying about on the band's touring, but I've never considered it incredibly memorable. I enjoy the business and the atmospheric elements of "Mentally Blind", but despite its diversity, it reeks of 'kindly get to the damned point'. "Destiny" offers us a tranquil 30 seconds of calm before it folds into the clutter of aggression, but nothing else of interest really happens until the lead and choppy bridge melodies. I quite enjoy the charging emotions behind the title track. The taut velocity often thrust into "Out of Touch". The schizoid glaze of the guitars in "Nothing is Everything". None of these are top billing, but they're easily the measure of my favorite Human tracks like "Suicide Machine".

Not sure if it's the change in musicians, or simply that Schuldiner was better able to flesh out his ideas for this record, but it's a noted improvement from its stagnant 1991 sibling. A revelation that not all will be lost in this creative transition from the pungent pits of gore to the social consciousness conveyed through the lyrics. This has essentially the same Scott Burns mix as the last album, if marginally more potent (though I would also attribute this to the superior structure of the songs). The songs are not all equally memorable, but the majority have at least something of value within their clinical carapaces. Individual Thought Patterns marks a steady escalation in qualiy that would persist through the following album, Symbolic, and though I'd never choose this over my beloved Leprosy or Scream Bloody Gore, it'll do in a pinch.