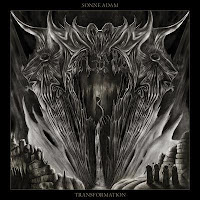 Well, it's now official: old school death metal has gone viral. When a wave such as this is suddenly reclaimed by rock star labels like Century Media, you know the numbers must be there to back it. Thankfully, for all of us, this is a far less annoying development than the death- and fashioncore we've been abused with for years. In truth, it is quite welcome, and if artists like Israel's Sonne Adam continue to ooze forth from the pores of this genre of rediscovery, then we're in for a world of delectable darkness and damnation. For most, the quality of this band will probably come as an unexpected shock; but I'm honestly not so surprised, as they released a decent EP last year (Anger With Hammers), and one of the guitar players is also a member of Tsorer, a vile and excellent black metal duo who dropped their amazing debut (Return to Sodom) last year.

Transformation is an utterly decrepit, light leeching experience that paces itself perfectly between rude, doomed valleys and spidery, opaque heights, never dragging its feet in the monotony that so threatens new artists who so absorb and admonish the past. If you've heard the US band Father Befouled, then you're pretty much in the right ballpark: a huge influence from proto death/doom acts at the dawn of the 90s; a fuck ton of Incantation and perhaps a touch of the later emerging Runemagick. Perhaps not so novel, but the key is that Sonne Adam are so skilled at restraint and the placement of atmosphere that they fall nothing short of subterranean majesty. I found myself completely sucked into the harrowing march of "I Sing His Words", the choppy meandering of "Take Me Back To Where I Belong", and the gore endowed grace of the title track, with its stylish lapses into thinner, ringing distorted guitars during the creepy lead sequence.

The band usually accords its ambient elements within the gnawing worms of its metal tracks, but there is one exception here, "Solitude in Death", a resonant underground guitar instrumental that fits right in with the surrounding gloom. Transformation has a one track mind, and that track is carried along ineffable, incessant blackness that never releases its grip. You will be swallowed, strangled, and destroyed by the time the 42 minutes have passed, and if you're listening during daylight hours, you'll probably have to glance outside in hopes that the sun remains, that we're not all about to be frozen to death in the quelling of the star that sustains us. Lord Byron said it best: 'And the clouds perish'd; darkness had no need of aid from them - She was the Universe'. Well, She has just ruptured her womb, the able heretics of Sonne Adam slid forth on her dire humours, now arrived to dispel the warmth of the living and cannibalize their hopes and dreams. Time to work out my Will, though I doubt there will be any left to claim it.