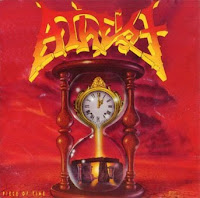 It's no secret that death metal was largely a mutation of the thrash genre, but some bands held on more closely to the tenets of that precursor than others. This was as obvious in the Florida scene as anywhere else; bands like Atheist, Hellwitch and Morbid Angel clung heavily to the vicious speed and excitement of the Bay Area, but cranked those elements out to the nether reaches, simultaneously adapting the vocals into a more brutal and caustic resin. Piece of Time is without a doubt an impressive debut effort thanks largely to the monstrous rhythm section of Roger Patterson and Steve Flynn, far more intensely driven than what peers like Death or Obituary were churning forth; but I should also note that Kelly Shaefer's labyrinthine, psychotic vocals were something new as well, a less guttural application than Tardy or Schuldiner, but fully demented in their own right.

We were also experiencing one of the earliest inclusions of a heavy jazz influence to the metal milieu here, though it's not nearly so prominent as that found on the following albums. Within Piece of Time, it's manifest in the rhythm section swerves and shifts beneath the storm of hectic guitar patterns, but at the same time, it's also responsible for my biggest frustration with the album: that the band are producing such an oiled sequence of riffing overload that the tracks often feel like little more than manic waves collapsing into one another. Dissected, almost every guitar line on the album provides well plotted mayhem, but once affixed to one another they seem to go more for business than effectiveness. I also don't care much for the leads, they are wild and often uncouth transgressions which seem to benefit neither from catchy flickerings nor the wild excess that bands like Slayer and Pestilence put on the map. Piece of Time is a bewildering act of sharpened lunacy, and remains one of the best Atheist records, but it's not exactly perfect.

I do enjoy the synthesized intros to "Piece of Time" and especially "No Truth", the tracks which bookend the debut and are coincidentally among my favorites. The former is alleviated by the thick presence of Patterson's wandering bass-lines, soon joined by the frenetic and choppy, tech thrashing spasms and Shaefer's mad scientist ministrations. The latter is characterized with some wonderful melodic spikes (around 1:30) that hammer off against the punctual rhythms and the start/stop of its ghastly moshing violations. Otherwise, I really enjoy "Room With a View" for the balance of eerie, descending patterns and plunking bass explorations; "Beyond" for its flagrant force and bouncing vocal patterns that cede to screams; and "I Deny" with its swaying balance of confrontational, bludgeoning rhythms and mind teasing aesthetics. But even these have a few moments in which the tides seem to break against one another as if they were pieces being forcefully jabbed into the wrong place on the puzzle. Others like "On They Slay, "Life" and "Why Bother?" are equally head spinning, perhaps, but not so memorable.

If Piece of Time is most important for one thing, its the potential it showed for the death/thrash metal crossroads to explore new heights of frenzy, new spastic reaches of velocity. Surely we had a number of technical thrash bands like Coroner, Watchtower and Deathrow delivering masterful mergers of memorable songwriting and stunning proficiency, but Atheist set out to prove that these standards could be taken to the next extreme, the unfolding frontier that was death metal. It also largely eschews the horror/gore lyrics of other Florida death acts for a more serious examination of social and temporal constructs. I don't love all the songs here, and I don't love the production, which in my opinion lacks some depth that would have better delivered the considerable chains of notation, but its a punishing postcard from the asylum nonetheless.