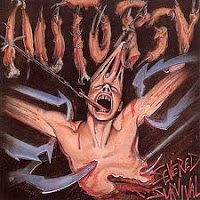 It is here that I admit to a bit of cheating, as I've decided to include Autopsy as a part of a project to once again experience the history of Florida death metal through album reviews. Autopsy is not really a Florida band, but there's a clear connection to that scene: vocalist and drummer Chris Reifert was once a member of the infamous Death, performing on the Scream Bloody Gore album and a few of the rehearsals and demos prior. Since I've long found the Autopsy style to be a curious deviation from the structured compositions of Chuck Schuldiner, I can't think of a better time to dive into their recordings, of which Severed Survival was the first full-length and first released through Peaceville.

Obviously, there are a lot of parallels to Scream Bloody Gore, but Autopsy's approach creates a crude aural motif that incorporates rawer guitar tone and thick, plucking Steve DiGiorgio bass lines that offer some distinction. Reifert's growls are comparable to Schuldiner, but more bloody minded and throaty (though not as excessive as John Tardy). I truly love the guitar sound on this debut, fresh and incredibly barbaric as it is, and the drums are organic and virile. From a songwriting standpoint, there is not a huge gulf of difference, as Severed Survival pursues the same, simple floe of notation that is present on much of Leprosy. Slower, haunting passages are interlaced with a simpler lattice of speed bursting, the leads are frenzied rather than melodic, and things are kept largely simplistic, its brutality borne only by the savage throat and unrelenting, unapologetic attitude. That said, I don't find this album to be quite so effective as the first two Death records.

The reason really just comes down to the guitar lines. They're punishing and primitive, truly heavy from a 'fuck you' punkish perspective, but they're simply not as morbid or catchy. There is nary a brilliant surprise anywhere on this album, so it seems to rely more on its atmosphere, and the sludge-like, doom discourse which Reifert and Coralles would later explore through their following band Abscess. That said, Severed Survival is not deprived of a sanguine, ooze like consistency and several cases of grisly, memorable fare. I'm fond of "Service for a Vacant Coffin" with its mix of Repulsion-like grinding and chagrin grooves; "Gasping for Air" for its copious strings of bass and the superb breakdown and lead; "Critical Madness" for the cystic, doomed crushing of the intro and the enthusiastic acceleration therein; "Pagan Saviour" for the arching, obese composition and brutal, godless vocals; the CD bonus track "Stillborn" and its grinding gore stench, lead and breakdown.

In fact, I don't think there's even a single track on the album that isn't fun to experience, they just don't stain the conscience for a long duration. The lyrics are violent and visceral, pure gore akin to Cannibal Corpse, and I favor them over those of Death. I also prefer the production here, it's got a more dynamic appeal to it than the very level, brash resonance of Scream Bloody Gore. The solos never feel useless, and the organic quality of the mix provides a more accessible bridge towards rock, punk, sludge, and doom territories. DiGiorgio also fails to flagellate himself with excess self-indulgence: his performance is distinct, with a lot of solid chords in there, but he reins in and never does a disservice to the rest of the instruments. All told, I prefer the more vile and cavernous structure of the follow-up Mental Funeral, but this is an entertaining debut, and suitable unsafe to bring home to Ma and Pa.