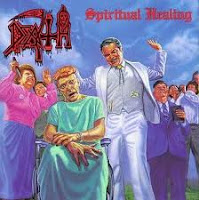 Conceptually, Spiritual Healing feels as if Chuck Schuldiner had emerged from the creepy catacombs of its predecessors, grabbed himself an ice cold lemonade and taken a look around the world for once. The lyrics of this album deal less in the sheer thanatopsis of Leprosy than its present environment, or the plausible technological nightmare scenarios of our shared future. Naturally, this shortens the shadows of morbidity that previously hovered over the writing, and lengthens the band's relevancy against the backdrop of popular thrash metal, but I was quite pleasantly surprised that Chuck could still tear out a truly devious riff or two. This is also what I'd deem the 'Earth' phase for death. No longer was the listener being dragged through the rot infested sub cellars of pestilent horror (which I for one had no problem with), but Schuldiner's ambitions had yet to carry him among the clouds and beyond...

But first, they would carry him to the mercenary James Murphy, who supplants Rick Rozz here with ease. Terry Butler, while credited on the previous album as bassist, actually performs the instrument here, joining Bill Andrews' steady rock-inclined drumming. You can hear a mild difference in the guitars, armored with more muscular melodies than Leprosy, but I would not say that this is necessarily a technical superior to the sophomore; in fact I didn't often experience the same haunted exhilaration as two years prior. This is yet another Scott Burns mix job, a name that would become synonymous with not only Florida death metal but the scene at large, but as opposed to the uneven sound of Deicide or The Ten Commandments, here he seems spot fucking on. The guitars are a crisp, balanced pair of knives that deliver each surgical spike of brilliance with certainty, and the drums, bass and vocals are all stirred appropriately to carry their weight, without ever sacrificing their individual strengths.

Songs. Death still possessed them in spades, and this is the last of what I'd consider the band's classic, supra-riffing stables. "Living Monstrosity" christens the album with a joyous, pummeling curvature, Schuldiner's homage to the crack baby (remember slinging this terminology around as an insult in the late 80s?). There are no less than three incredible riffs buried in some rather comfortable surroundings, the first the rolling bridge leading up the chorus (1:15), the second the doomy breakdown before 2:00 that leads into the swerving, flanged dual melody, and the final being the groove behind the lead directly in the song's center. From there, the album gets even better with the doomed lead-in to "Altering the Future", also invested with some excellent death/thrash rhythms; and "Defensive Personalities", which ups the riffing ante even further with a concrete fervor, rubble strewn breakdowns and a predictable yet intimidating chorus sequence. Beyond its legendary intro melody, "Within the Mind" plods along at a more subdued speed, with some giant groove hooks reminiscent of "Pull the Plug", though it's not a favorite.

In the tradition of having the title track serve as its lengthiest, "Spiritual Healing" manages to one up even "Leprosy", with nearly eight minutes of content, opening with another fancy piece of tapping (Chuck should be credited with some of the best such sequences in all of extreme metal, to this day). The ensuing barrage is overall pretty solid, but I won't lie, there might be a minute or two of fat here that could be clipped in lieu of the better rhythms. "Low Life" transforms from a clinical groove to a number of variations, including a giant doom step around 1:20 that could just have well been a Candlemass riff (it probably was). I love "Genetic Reconstruction", the way its brick opening rhythm carries forward to the creepy bridge as Chuck's foul poetry fires off against the practices of cellular surgery, cloning and such. Lastly, there comes "Killing Spree", with another of the signature opening sequences that cedes to a pair of excellent mute streams and another of the legendary, propulsive breakdowns.

Spiritual Healing is just not Leprosy for me, nor even Scream Bloody Gore. It's not a pinnacle performance for its time, nor does it stride ahead of the previously established parameters aside from the lyrical content. Ironically enough, once Chuck took such broader steps with Human, I found myself losing some interest. Spiritual Healing might just be the 'safest' album in all of the Death catalog, but it's pretty damn good regardless. The riffs are still impressive and catchy, and the focus remains on accessible rock song structures as opposed to the manifold chaos of what Morbid Angel and Atheist were creating. You have to admire the guy for not caving in to such outside pressures. Schuldiner and most of his troops had no dearth of proficiency on their chosen vessels, but the songs always remained central (even those I didn't enjoy); simplistic enough that they wouldn't be entering the Guinness Book of World Records, but thoughtful and more than capable of sinking hooks into the listener. A few slackers here ("Within the Mind", title track) but it's honestly the last nipple-perking Death record before the cosmonaut conditioning.