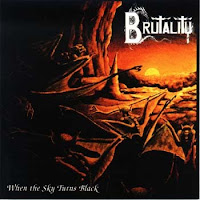 After taking a sizable stride forward with Screams of Anguish, the unsung Brutality would do it all again the following year through When the Sky Turns Black, their second album for Nuclear Blast. Anyone familiar with the debut will recognize many of the same strengths: a clear and powerful Morrisound mix courtesy of Jim Morris, tightly executed musicianship on par with most of the Florida peers, forceful songwriting cognizant of fluctuating dynamics. If there was one minor evolution of note, it seemed that Brutality had become more focused on the incorporation of melody directly into their hammering rhythms and tremolo guitar lines. I'm still drawn to comparisons of UK bands Benediction and Bolt Thrower, but these are due in part to the gruff and level gutturals.

When the Sky Turns Black is inaugurated with the title track, rolling double bass rhythms like concrete pylons beneath the scintillating dual melodies, soon to lurch into a grooving tumult with miniature, spliced leads. It's not immediately catchy, but it picks up intensity around 1:15 when the double bass returns to accompany a more carnal, disgusting riff. "Race Defects" uses an airy, clean guitar passage before its own alternating blast/grooves commence, moving at the same relative pace as the first track. Like Screams of Anguish, there are a couple of moderately brief instrumental passages here in "Awakening" and "Esoteric", both tasteful and driven by the clean, acoustic guitar tones. They've also included a cover of Black Sabbath's "Electric Funeral", which it turns out is pretty damn effective as a death/doom hybrid, but most of my favorite tracks here come later on the recording: the staggering, oft bursting "Foul Lair", the meaty fortitude of "Artistic Butchery", or the pulverizing climax "Shrine of the Master".

With all of the keys to success here, Brutality should have broken out far beyond their regional association, but this album ultimately wound up in the same seat of obscurity in which its elder sibling had planted its considerable posterior. Seriously, not many death metal records of the day possessed a production standard this high, and it has retained its polish through the years. If I'm comparing it to Screams of Anguish, then I'd have to place this slightly beyond the debut. There are still some barriers restraining it from the status of a masterpiece, primarily the fact that the majority of its guitar riffs are not individually distinct or masterful enough to scale that height, and the vocals don't have a ton of character to them. However, in every other department, this band soared. Memorable, iconic cover art, good lyrics, potent musicianship, varied songwriting that never numbs the listener. It's well worth the expense to add this to your CD collection.