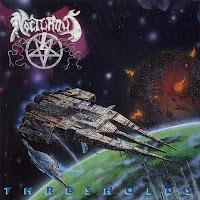 Despite the positive score I've given Thresholds, I actually consider it rather a disappointment compared to its predecessor The Key. While that was an anomaly among the emerging death metal background, a dark and atmospheric trip into apocalyptic artistry and sci-fi speculation, the Nocturnus sophomore doesn't really add a lot to the band's repertoire. Technical death/thrash with blunt vocals and hints of progression. It's clearly far less ominous than the debut, without any "BC/AD", "Neolithic" or "Lake of Fire" to grasp the listener with oppressive terror, but on the whole it's a consistent, level offering in much the same vein. The notation and intensity are simply not configured into the same show of force, though credit is due that the band hung on to their imaginative concepts and lyrics rather than sulk into the streaming gore of their peers.

The production here is arguably better or worse than the debut. Less muddled, but perhaps a slight too processed. The compositions are just as dynamic, but the mix here doesn't lend itself well, with a drab clarity to the guitar chugs that doesn't feel all that powerful. The initial salvo of songs are flush in style to The Key: "Climate Controller" having a few curious twists and turns, Louis Panzer's subtle synthesizer presence playing it perhaps too safe, but a nice lead tone and honestly one of the more memorable tracks on the album. "Tribal Vodoun" offers us a more hectic mysticism, with some writhing flurries of lead, but the keyboard tone sucks and the riffs are not all that striking. The "Nocturne in BM" is a nice instrumental with its glistening keys, but it waits too long to unleash its catchiest bit at the climax rather than hit us directly and then escalate off that to what might have been a far superior construction. While "Arctic Crypt" has some decent thrashing rhythms cutting through the din, I felt like it was aesthetically not a good match for its implied titular imagery.

The same for "Aquatica", which is conceptually like a Bioshock...before Bioshock. Sure, it opens with the streaming percolation samples we'd expect, and brings it back to the fore numerous times, but I'd have liked to hear more cheese in there. The riffs themselves are quite nice though with some epic leads, and "Subterranean Infiltrator" follows much the same motif and tempo sans the bubbling presence. "Alter Reality" and the closer "Gridzone" are both competent works, but like most that have come before them here, they too lack some of the morbid, threatening bluster of the debut, focused instead on their coherence and the quality of the leads. Mike Browning really works up a sweat on the latter and I found Dan Izzo's vocals to be marginally more passionate, so I'd say that qualifies it alongside "Climate Controller" as one of the album's best.

As a massive consumer of science fiction literature, films and gaming, I had no other choice but to appreciate a band like Nocturnus which looked forward to the stars, eschewing the grime and smear of the majority of their splattered statesmen. If only the execution had been equivalent to the vision, this might have been one of the greatest death metal acts in history, because the possibilities were limitless to the amount of conceptual albums they could have written. Such a cosmos of synthesized sounds and samples to affix to their riffing! Unfortunately, they were only able to produce one great album in their time (The Key). Not to say that Thresholds isn't still interesting or worth hearing, because it is, but the production is rather stagnant and the songs do not hold up quite so well.