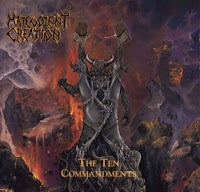 Gaze into the crystal ball of this band's past, and you'll witness a familiar fable. A pissed off group of adolescent Floridians for whom the thrash metal genre was simply not excessive enough to vent its myriad frustrations. Admittedly, Malevolent Creation has never been numbered among the elite of the death metal genre, but they've nonetheless had a successful go of it, touring and releasing a large number of albums, sticking it out for the long run, a revolving door of members circling an axe slinging central figure: Phil Fasciana. But during those formative years of the scene, what exactly did this band have to offer those of us who were affixed on the conquests of their more highly regarded peers?

I'll tell you: Malevolent Creation offered an urban, ass-kicking alternative, a more immediate threat to the sanctity of your bone structure. While Morbid Angel and Deicide were consorting with Elder Gods and being in return broadcast intense waves of reeking apocryphal miasma, Nocturnus was performing a careful moon landing on alien soil, and Death and Obituary were emerging from the crypts and graveyards, Malevolent Creation was standing right on your street corner, pimping hos and collecting drug fees at the cost of blood money or human teeth. This was the brutality one was most likely to encounter when one strode out into the stinking night of the inner city in the 80s or 90s, fearing for one's wallet and more importantly for one's goddamn existence in a world of thugs and pushers. That said, stylistic comparisons are inevitable with other bands of the scene, in particular Deicide, who utilized a similar congruence of battering speed and neck breaking mosh splatter.

This album opens almost like some forgotten gangsta rap epic, "Memorial Arrangements", as last rites are narrated over some fallen friend or associate; the one difference being the biting despair of the guitars and drums, which open with chords and a warlike march against the lashing winds, then mutate into a thrash-like christening before the dire melody rings out. And then it's time to duck, as the bullet storm of "Premature Burial" comes howling at you, its projectile percussion seeking to permeate your vitals. Vocalist Brett Hoffman possessed a tone not unlike Chuck of Death, only carried further to a more grisly extreme, like a pissed off mortician who had seen one too many fallouts from a gang war or cocaine strung serial executioner. Drummer Mark Simpson is also tight, one of the more forceful strikers alongside Asheim or Sandoval, and he brings a particular weight to the deep thrashing matrix of Fasciana.

This band was also incredibly good at writing wild but punctual leads that helped whip the muted pummeling into an added frenzy. Malevolent Creation were very apt at creating a momentum here and then following it through, even when the breakdowns occur you just know they're about to fire back into a storm of onrushing traffic. Songs like "Multiple Stab Wounds" and the frenetic "Remnants of Withered Decay" seem like a natural and welcome extension of the brutality inherent in extreme California thrash like Dark Angel. The musicianship is so intense that even if the individual riffs weren't all that catchy, the band still delivered thorough excitement. That said, there are a few wildlings to stand out here like the arching, twisting guitars throughout the verses of "Impaled Existence" and charnel house romp of "Sacrificial Annihilation". All told, The Ten Commandments is like an instrument of blunt AND bladed compulsion that you might bring to bear against your enemies, an excise tax of eradicating force.

No, it wasn't exactly brilliant, and aside from the concrete and syringe strewn warfare implied in its lyrical musings, it did not bring as much fresh gore to the arena as the band's more affluent, influential statesmen. However, this debut is still a lot of fun 20 years later, and the band's no prisoners attitude towards extremity has absolutely stirred up a following. The mix is not so great here, one of Scott Burns' less impressive feats among the early wave, but I do like how the vexed vocals resonate like street vultures over the crashing undertow, and the leads sound like heroin addicted vipers. Sporting one of my favorite Dan Seagrave covers, it's a solid package that in my opinion, the band has yet to surpass, even though they'd tread darker, occult lyrical paths over the course of the next two albums (returning some years later to the pavement pounding aesthetics). Ugly, aware and determined. The Scarface of death metal.