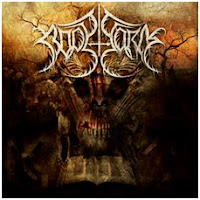 Though veterans like Pestilence and Asphyx have regrouped for touring and albums, Hail of Bullets and Sinister persisting in their personal punishment; there has not been a massive influx of younger artists into the Dutch death metal bloodstream. Enter the Bodyfarm, a fresh phalanx of aggressors intent on altering this course, with a decidedly old school approach that leans entirely upon the fundamentals of slower to mid-paced crushing momentum. It's obvious that Bolt Thrower, Asphyx and Hail of Bullets are comparisons here, especially the excellent production values of this debut EP, but I'd also draw a parallel to the earlier albums of Swedish Hypocrisy, due to the stripped down songwriting values.

As the style is wholly reliant on pummeling primacy and monstrous grooves, there's not really an enormous level of innovation to what the Dutchmen are playing. "Slaves of War" left the biggest impression on me with the ascending thrash mutes woven into the double bass and the forceful hardcore surge of the bridge, but there wasn't a lot of distinction in the writing. "Heartraped" accelerates into some of the fastest material on the EP, numerous blasted rhythms offset with grooves, most notably the Bolt Thrower swerve at about 2:40; "Final Redemption" concocts an elixir of lumbering breakdowns and squeals, while "Bodyfarm" itself escalates from a belligerent tension to another of the band's scarce bursts of speed/lead. The whole shebang is led off with a martial synthesizer intro that suitably foreshadows the ominous battlefields to follow.

Naturally, there is a substantial audience for this sort of authentic, early 90s fare, a hybrid of War Master or The IVth Crusade with Penetralia or Osculum Obscenum, and to that extent, Bodyfarm does not prove a disappointment. The mix benefits from a massive, brutal clarity that should shake down any set of speakers like the presence of mobile artillery. Unfortunately, these strengths are counterbalanced by a noted lack of sticking power in the guitar notation. The EP does well to peak your interest through its intro, and the walls of tone deliver a satisfactory environment of throughput, but the riffs are not highly titillating, nor do the competent grunts possess the same ruthless character of, say, a Martin van Drunen. Bodyfarm is not something that proves memorable after a few spins.

That said, if you're a proponent for such yesteryear's sincerity, this group does not offend. They certainly sound the part, if nothing else. A few more tours of duty, some catchier guitars to draw the ear deeper into the concussion, and these Dutch could become real contenders.