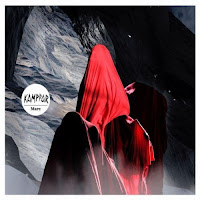 Whoever would have guessed that Kampfar were interested in women's studies? Such is the concept behind Mare, their 5th and most accessible full-length effort, but before you go gathering your pitchforks and torches in a panic, know that this is not some crass transformation into an Oprah Winfrey of pagan black metal. The Norsemen are still delving into the same mythology and folklore that has inspired their previous works, only honing in on a general, gender driven theme (witches, etc). It's a curious idea, one not wholly expected from a band of Vikings, and thankfully, due to the band's significant and welcome compositional skill, it works rather well. Perhaps not so well as their more vicious, early albums, but it will suffice.

As was the case with their previous album Heimgang, the band utilizes a thick guitar tone that creates an instant surge of power, not unlike later Immortal or their spin-off I. The riffs are steady, simply, and very often dwelling around the mid pace, while the drums thunder off and the melodies drift off into the tangible cold nightscape. The vocals cut straight down the middle, perfectly aligned with the meter and melodies, and thus a swelling of contrasts is created that reeks of majesty. That said, the band does seem to rely here on some often generic, or flat out dull patterns of notation (the bridge to "Mare", or the ponderous "Volvevers"), and thus certain tracks can become rather a slog to survive through. Others are simply too glorious to pass upon, like the hammering grace of "Blitzwitch" or the horn swilling "Bergtatt". There are also a few pensive piano or symphonic elements used to create atmospheric intros to the brooding "Huldreland", the melancholic "Trolldomspakt", or the crushing if predictable "Altergang".

I felt like there was just enough quality on Mare to enjoy it, but I won't claim that it's the equal of any of the previous outings. Certainly more subdued and tranquil, but never negligent of the 'wall of sound' effect the band have utilized in the past. I could do without a few of the tracks, especially the bonus "Bergtatt (in D Major)", a more uplifting, anthem alternative which painted an unintentional sonic portrait of drunken highlanders lumbering over the hills wearing lingerie, which I've yet to burn from my mind. I also felt the same comprehensive emptiness that drove me away from the latest Moonsorrow album. The songwriting structures are solid, but never all that inspiring, and it's almost as if the concept of the album itself outpaces the actual music. Ultimately, though, Mare is another good Kampfar album...just not up to the same standards of the back catalog.