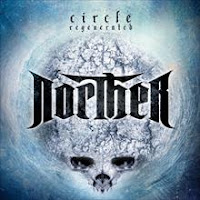 Norther might possess all the substance of a shopping spree at your local brand name clothing boutique, but I've certainly found them to be adequate songwriters for a number of their past albums. The Finns have always been compared to their countrymen Children of Bodom and Kalmah, or the Swedes Soilwork for good reason: they use the same frenetic, melodic pacing and excess of synthesizers as a central instrument. To that effect, Circle Regenerated, their sixth album is no different than what they've been writing on the past few albums Till Death Unites Us and N, both of which were well developed, accessible and admittedly 'bubblegum' flavored even in comparison to the earlier, heavier efforts.

Think Children of Bodom with more clean, pop oriented chorus sequences. If such a prospect terrifies you, then you will spit upon the ground Norther so proudly stride upon. Otherwise, if you're a fan of the past few records from Soilwork or Omnium Gatherum, you'll likely feel right at home with Circle Regenerated. It's not really all that good, in part to the aforementioned cleaner vocals which sound extraneous and unnecessary. Take the opener "Through It All", an energetic offering with a steady escalation towards a snarled climax that simply does not need the following clean vocals. Much of the depth here is created through the relationship of the keys and the guitars, the latter of which alternate between progressive thrash, chugging and your basic melodic death chords, and such traits are solid throughout the album: "Some Day", "We Do Not Care", and in the strident thrust of "Break Myself Away".

The problem here is that the band confine all notions of possible creativity to these two instruments, and even then we've heard this album constantly from Finland for years now. An obvious better example would be the latest Children of Bodom, which fires on similar cylinders to this but is slightly more successful at inspiring the listener's fingers to hit the repeat button. Norther otherwise seems devoid of anything interesting to say. You needn't even glance beyond the song titles: "Believe"? "Falling"? "Some Day"? "Truth"? "The Hate I Bear"? carry all the emotional appeal of a gaggle of preschoolers fighting over a piece of apple pie at recess. Stop being so goddamn laconic, and offer us a framework we might find compelling. No layers to peel away. Too much on the sleeve. It wasn't such an obstruction when the music was better, but six albums deep, and you should have more to say than this candy coated gibberish... Lady Gaga has a greater capacity for prose.

I hate to sound so harsh on Norther. Their musical abilities are adequate (if not novel), but it would be nice if they could flex their virile energies into more than just the ducking and weaving of the melodies. The previous album N had a similar, simplistic aesthetic delivery (lyrics and titles included), but there were a few outrageously fun tracks there that compensated. Here, despite the fervor with with several members have applied themselves, the songs were very difficult to distinguish even after numerous plays through, and ultimately it comes off as their least impressive effort to date.