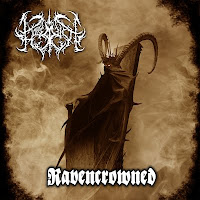 I'm ever a sucker for a well-crafted intro, and Italy's Kaiserreich have prepared one for their sophomore Ravencrowned in "Hapax Legomenon", a potent escalation of martial and symphonic elements that successful stirs up the desire to experience the rest of what has been wrought. Sadly, beyond that, I can't promise anything with such sweeping or powerful potential. This is simply a competent, middle of the road black metal effort which manifests much of the same dire atmosphere as Norse pioneers like Mayhem (De Mysteriis dom Sathanas) or Darkthrone ('93-96), if not as raunchy. Primal aggression composed with a melodic subtext and due diligence towards its own dynamic range. Thoughtful threads of melancholia and occult speculation delivered through the lyrics. And a pretty damned wicked looking horned tyrant seated upon its face.

Ravencrowned is a pretty long album, about an hour in fact, and thankfully the Italians do not waste this time in boring the barbed tails off of our bottoms. They've got a good mix of tempos and atmospheric sequences, not to mention the variety in track lengths. Shorter pieces like "Veleno" and "A.B. 86" center on specific, sorrow-stoked rhythms of melodic desperation above a solid percussive foundation, and the band will occasionally offer an unexpected twist like the gang shouting in the depth of the latter. A nice touch. Elsewhere, there are more monolithic ambitions like "Dreamfall (Pure, Tortured Heart)" and "Tempest (Of the Unwept Tear)" which explore a broader variation in speed and mood. To be honest, while these pieces often conjure up a decent riff or two, they feel a lot more empty than their shorter peers, with the one exception being "Lunes Ov Judgement" and its creepy, compulsive midsection.

The production is a step above the primacy one usually associates with the underground end of the spectrum, with clear guitar tone and the drums set at an appreciable mix. The vocals are your garden variety of rasping torment, though to their credit, they do have a few emotional thorns to prick the listeners' ears. Kaiserreich does not employ a lot of synthesizer beyond just the intro, nor do they excel at breeding ambiance or atmosphere through their compositions. Instead, this is more of a direct tribute to the 90s black metal out of Scandinavia, where bands would include some haunted inauguration to get the blood chilled, then proceed into more direct channels of rabid aggression. Ravencrowned shows a clear intimation of its influences, and a competence in its execution (all around), but it never quite achieves the irresistible darkness of so many that have come strode before it into the shadows.