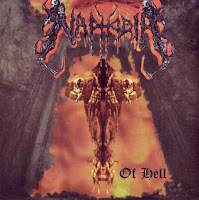 With luminaries like Gene Hoglan and Chuck Schuldiner making guest appearances on this album, it's rather a shock that it was not held in wider regard. But perhaps the defining characteristic Of Hell is the performance of drummer Tony Laureano, who would go on to perform in Nile, Angelcorpse, Dimmu Borgir, and a host of other noteworthy acts. His muscled dynamics help lend Naphobia a raw, viral strength that they might otherwise not be present. Beyond that, though, there is not a whole lot to substantiate this unknown Florida group from its peers. They've got the choppy structure of Deicide, burst potential of Morbid Angel, and the otherworldly brutality of Nocturnus, often congealed into a disjointed frenzy of limbs.

But they keep the listener busy enough that, even when seemingly about to explode, the ears will be distracted by the old school riffs and the percussive fortitude. I'd liken this album to the Brazilian band Krisiun, or Hate Eternal, only Naphobia were marginally less monotonous than either of those bands at their worst. The actual quality of the compositions does vary here, so something like intro "To Lead Astray" might play out like a sporadic, disengaged claptrap, but shorter tracks like "Pain Infini" and "Fallen Cross" deliver all the deathly charms, and pieces like "America A.D." experiment more with texture (not unlike Morbid Angel through the 90s). One can instantly identify the mechanical precision of Hoglan in "The Ungodly", but the song most will be pining for is "As Ancients Evolve". It's mixed a bit cruder than the rest here, but you can clearly hear Schuldiner's throat stretch over the battery below. Not so much a selling point as one might expect, though.

Still, with the ability exhibited on this sole full-length, Naphobia might have splashed about the same cesspool as their behemoth peers if given some further definition and exposure. For all its clutter, the majority of the tracks are captivating enough to one seeking extremity by the mid 90s, and the band avoids the gutter of gore, focusing in on broader lyrical concepts like politics and religion. The production is somewhat lacking, but organic, so you get a real jam room feel, though thankfully from a distance. Wouldn't want to be around Laureano if a stick flew out of his hand, or a kick drum rolled off his kit. Hell, just the wind and thunder alone might smite you. Of Hell might not be a cult classic to survive the ages, but its a curiosity that might have deserved more than it got. With the band dithering about in recent years, perhaps this page of history is not yet to be turned...