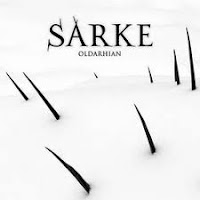 While I admit a certain predisposition for almost any recording the great Nocturno Culto alights his frost-tinged vocals upon, Sarke has a particular charm which exceeds even the flustering fanboy within. Part black metal, part thrash, all dowsed in calm and cautious songwriting and the atmospheric swill of backing synthesizers, there is just not a lot out there like it. Vorunah was a promising debut in 2009, managing to stand out against a superb and nigh incessant onslaught of black releases that year, and Oldarhian seems its logical followup, a spiritual successor to classic Celtic Frost for the new century. Steady, polished and strong of riff.

Similar to Vorunah, this album works best when the psychedelic miasma of its primitive contents yields a collaborative, creepy immersion. Sarke's rhythm guitars always hinge upon the familiar, yet he's got a rare talent for re-invention, stripping each pattern of notes to its core and then enforcing them with percussion, bells, chimes and epic (if cheesy) keyboard pads to the maximum effect. A drummer by nature, his beats are clean and bare, if dynamic. Nocturno does occasionally grow monotonous, as he never quite varies his grimy tonsils, but the intelligent and observant lyrics are delivered with authentic, gravel-like emotion that functions fluidly across the concourse of thrashing ballast in "Pilgrim of the Occult", "Paradigm Lost", "Flay the Wolf" and "Condemned". A few of the tracks delve into a more progressive, 70s doom style like "Novel Dawn" and "Burning of the Monoliths", or a fascinating fusion of multiple concepts like the titular "Passage to Oldarhian" with its coiled grooves and immense atmosphere.

All told, there are no slackers whatsoever on this album. It's slightly more consistent than the debut, though there were a handful of songs there that stood out more than these ("Cult Ritual" and "The Drunken Priest" come to mind). There is much to like here, especially the rich mix of the guitar and the vocals, and I was very satisfied that it was not some one off collaboration. The minimal artwork is hit or miss, the lyrics well written, but most importantly, Oldarhian steals the listener away to some cryptic otherspace, some veiled realm of antiquity accessed only by the drawl of its rambling. Sarke offers a subtle hypnosis while simultaneously rocking your face off across numerous tracts of variation, and I sincerely hope this sophomore will bring further recognition to what the pair are gestating, because I can certainly sense a primal potential here that might one day even rival (or complement) Culto's main squeeze Darkthrone. With a highly qualified live lineup now in place, there is just no limit to what might ensue.