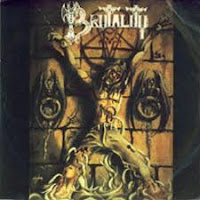 Though Brutality's Hell on Earth EP served as little more than a scatterbrained, ineffective bastard of crossover thrash and extreme metal, they would return in a few years with something far more focused, concise, and representative of their peak studio works Screams of Anguish (1993) and When the Sky Turns Black (1994). The Sadistic EP features only two tracks, released as a 7" and EP through Nuclear Blast; both of which have been made redundant through various issues of the debut album, but here they have tightened in on an actual style which works well for them, a clear mix of Harmony Corruption-era Napalm Death, their own Floridian Death, and perhaps some of the bludgeoning force of Suffocation and Cannibal Corpse for good measure.

"Sadistic" offers juggernaut, driving rhythms that are spliced through the core by rampant and memorable leads, plus all the double bass blasting and morbid chaos you would expect out of a 90s death metal band beginning to tow the line of what was possible. In the wake of a Morbid Angel or Deicide, this might not seem all that extreme, but certainly this band was flirting with the edge of possibility, pushing themselves as hard as they could. "Spawned Illusion" is even more of a primal battering, and though it was rendered less interesting due to its near immediate repressing to the Screams of Anguish album, its still neck-breaking fun.

Of course, the limited pressing of this release and the low level of content makes this a pretty useless purchase by today's standards, unless you are a collector of such frivolities. There's a newer issue of Screams of Anguish which contains both tracks, and considering just how good the debut album is in full, it's worth it to skip over thoughts of this and just purchase that, unless you are a collector of authentic, early works, in which case the actual value of content is not so much a factor in your spending. The songs here are pretty good, admittedly, but the format is played out and "Spawned Illusion" at least is better experimented among its creative peers in 1993.