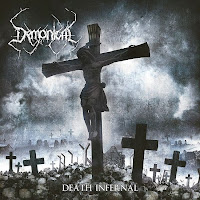 I can say with ease that Demonical are one of my favorite Swedish death metal acts, retroactively inclined or otherwise. Servants of the Unlight was a spectacular debut in 2007, and Hellsworn a crushing follow-up in 2009. Granted, the band can be fairly rationed among the multitude of old school worshipers clamoring for that elusive crown that the style's originators (Entombed, Dismember, etc) have failed to polish in years, but they have far much more to offer that mere aesthetic redundancy. In fact, I'd argue that Demonical are among the best songwriters in this space in some time now, even in their former incarnation Centinex; carefully pacing their albums through cycles of brutal ballast and rampant, sepulchral tension.

Death Infernal is no different, and while its surface promises only more of the same: with its meager crucifixion cover and the derivative, dense guitar tone we've expected since the 1990 classic Left Hand Path, it fully delivers as an album. "The Arrival of Armageddon" and "Return in Flesh" make for a formidable opening salvo, the former a head on burst of classic Entombed style aggression, the latter a memorable, mid paced hammering with fibrous, roiling guitars that drive its steady rock beat. Other strong points include "Ravenous" and its seared, subtle vipers of malice; "All Will Perish (The Final Liberation)" for the teeming, bristling melodies that offset the crushing weight of the chords; "Slain Warriors" for its Amon Amarth level of bruising, and ditto on "From Northern Shores". A few tracks like "Through Hellfire" and "Darkness Awaits" lacked the same fortitude of riffs, but they serve as functional ligaments to the rest.

Lastly, there's a cover of Emperor's "Night of the Graveless Souls" which sounds great in this death metal format, the descending melodies of the bridge hung subtly upon the precipice of the meaty Demonical tone, and insanely groovy during the breakdown. It's what you essentially want from such a cover: the band adopting it into their own, beloved orphan. In all, you pretty much know what you're getting into with Death Infernal. It doesn't detract from the formula the band exploding into with the previous albums, and might not feel so dark as Servants of the Unlight in particular, but it's fun and has held up through a number of listens thus far. I'd place its sum quality below Hellsworn, but its dynamically self-aware, and well worth acquiring if you're into Demonical, Centinex or other retrograde criminals like Tormented, Evocation, Internment, and so forth.