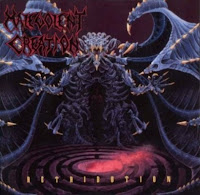 Through their 1991 debut The Ten Commandments, Malevolent Creation managed to define an aesthetic, urban brutality that was virtually unknown to the other Florida death metal acts. This was honestly their biggest contribution to that scene, because otherwise the music felt like a pastiche of ideas Morbid Angel, Cannibal Corpse and Deicide had already explored. Retribution partially serves to expand the band's lyrics beyond the streets of unrest, but the central focus is still on cold blooded murder ("Iced", "Slaughter of Innocence" and forth) upon the pavement of conflict. In all, though, this album is really just more of the same that we experienced on the debut. More tightly wound, perhaps. More brutal, but less cutting and explosive. A good sophomore, but not enough to evoke the same level of worship among the audience as some of their statesmen.

"Eve of the Apocalypse" opens with the Henry, Portrait of a Serial Killer theme before bursting into its level headed, deeply thrashing gutter of chug, tailor made for intense moshing below the forceful vernacular of Brett Hoffman. "Systematic Execution" uses more double bass and a rapid, blasting break to vary the dynamics, and then "Slaughter of Innocence", which is possibly my favorite song on the album, returns to some grisly, bouncing rhythms that are almost pure, punishing thrash metal with intensified drums. Very similar to what Deicide were doing with Legion, only more muscular. The remainder of the album continues along with the same, brick faced mentality, seeking to bludgeon the listener so hard that he fails to notice that there is no nuance or subtlety to be had within miles of its creation. "Monster" has a little more momentum than most of the songs, and "Iced" is one of the best at the construction of flailing, bludgeoning grooves fit for kicking in asses, but none are any more compelling than what you'd find on their debut.

Thus, Retribution becomes another of those albums which is all brute force and little dynamic, memorable insinuation. Great for when you just want to turn off the signals from your brain to your limbs and circle pit with the genre jocks, but not ultimately that interesting when faced with any other situation. The leads are decent, and the lyrics and music display a reasonable level of confidence and effort, but it seems to be another case where a band has all the tools for survival (great cover art, good label, strong musicians) but wallows in the exhaust of its own extremity. So thrilled at the spectacle of mock violence that would inevitably erupt at its live exhibitions that it ignores the songwriting element, and there is very little distinction among the constituent tracks. No personality of note other than serving as a kid brother to The Ten Commandments, and this is a trait that will plague Malevolent Creation through much of their considerable amount of output, an incessant parade of punishment that never penetrates the A-list. Stock muggings without lasting repercussions.