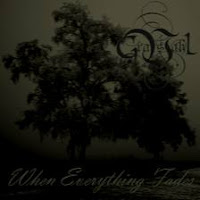 When Everything Fades is the second demo available solely from Germany's Gravsahl, who last year issued an impressive split recording with Kreetur which I also reviewed. The bulk of the Gravsahl material from that release ("Of Apathy", "Of Sociopathy", "Of Depression") is incorporated here, for a total of nine tracks and nearly 44 minutes of content, making it more like a full-length than a sampling to anyone who has yet to experience this disturbing single man dream state. As one might expect, this is what we might dub a 'bedroom' black metal project. Gravsahl is partial to raw and ruddy production values, heavily processed guitars, programmed drums, walls of active ambient melodies and vocals that sound like an orthodox black metal icon being strung through a spatial wormhole of drab colors.

The idea here is obviously to stir other emotions than merely the primal occultism of the parent genre, but to cast a lucid, muted pallor of depression and beauty atop the grislier aesthetics. To this extent, the remainder of When Everything Fades (beyond the tracks I'd previously heard) is a clear success. Most of the tracks develop in the same direction, outside of the swelling pure ambient intro "A Desperate Move" or the outro "A Last Lament". Subtle atmospheres develop through passionate streams of ringing distortion, ebbing synthesizer and scratching rasps. There are constantly 2-3 things happening in the compositions, so you'll never feel the ennui that such exhibitions can often create, and Gravsahl shifts into multiple tempos through "Just One Step", "Shattered Existence", and "Burning My Last Bridge" which are simply delicious. I kept feeling the impression that this was '4ad' black metal, reminding me of groups like Cocteau Twins or (early) Lush if you replaced the female, ethereal vocals with snarling and channeled the guitars into a dire lock step.

Like the band's 2009 demo A Part of Nothing, this is enjoyable; ultimately superior. Simply cast all bright illusions of pleasantry aside and let yourself sink into its primitive textures and tones. It fits fluidly with the split material, as if the two halves were ever intended to conjoin into this one body. The material is free to download from the Gravsahl MySpace much like the prior output, and it might be about time that labels gave the project a listen. There is obviously still some development possible here: a few of the tunes sound samey and I'd like to hear a wider variety of synth pads, perhaps a dip into the unexpected from time to time, but this is never the less an effective fit of melancholy hovering over a gloomy, obscured landscape. Recommended to fans of ColdWorld, Lifelover, Burzum and so forth.