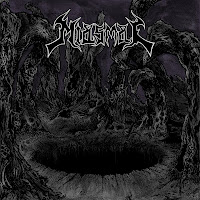 It sucks to have to constantly chew the soles off my boots, but these Swedish old school wannabes are so persistent in reliving and recapturing the copious evils of their influences that I am, on a near weekly basis, forced to reconsider my exhaustion with such efforts and then firmly plant the footwear into my maw. Miasmal is one such case, sure to join the ranks of Bastard Priest, Tribulation and Tormented as one of the best that metallic nation has had to offer us via the 21st century that it hadn't offered us 20 years ago. For a debut album, this has just about everything you'd expect of the style: driving d-beat rhythms, insidious bursts of hideous agony, and a dire and oppressive atmosphere which feels like a mouthwash of grave dirt.

I've already reviewed this band's 2010 EP, which was also self-titled, and those two tracks: "Creation of Fire" and "Bionic Godhead Erase" are included with this package, along with their 2008 demo, ALSO self-titled, so you're getting quite a nice collection here of all that Miasmal wanted you to hear up to the present. Coincidentally, it's all pretty flush in both mix and song quality, so in effect you can listen straight through and stay reasonably absorbed without the usual interruption of 'hey, this sounds like crap, what happened?' that other full-length/demo mixes often suffer. It also helps that there are no redundancies, all of the tracks are unique to their original incarnations and remain so here.

The true strength of Miasmal must not come from originality, but the fact that they know precisely how to write their goddamn songs, setting appropriate moods to offset their turgid velocity. "Mesmerized" opens like a rampant war stomp, picking up into the expected energy of reliable d-beat death & roll ala Entombed or Desultory, and then seasoning with dour melodies. Several tracks intensify the inherent brutality, like "Equinox 432" and the grinding, all devouring "Toxic Beed". Others like "Mists" counterbalance the onslaught with a measured, haunting atmosphere, created through clean guitars across the backdrop of sodden chords and then escalating into the fluid pummeling of their environs. Most importantly, though, this is a band who can write a good, halfway creative lick, and you'll find these peppered through fare like "Chronicles", "Bionic Godhead Erase" and others with enough frequency that you'll simply never doze off through the entire experience (even the bonus content).

With its great packaging, 14 tracks of fairly consistent strength and a dark, authentic energy coursing through its veins, Miasmal is surely one of the better retrograde Swedish death metal albums I've heard in recent months. It's not perfect, as a lot of the core rhythms bear a familiar feel to them, but its fresher than a lot of other bands attempting to dig into the same tomb, and worth the investment if you're a sucker for the style; perhaps even if you're new to it...