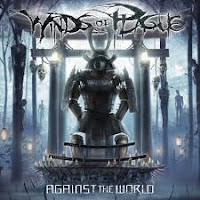 As lackluster as much of the hybrid genre's output has thus far been, I am not entirely oblique to the potential inherent in the fusion of death metal and hardcore music, i.e. deathcore. I've heard a handful of albums over the past few years that deliver on the promise, but painfully few in ratio to the amount being shoveled out in totality via the independent 'majors' and smaller imprints. It was only a matter of time before some of the emerging scenes' artists would apply adaptive strategies to the rapidly diminishing formula and California's Winds of Plague are clearly one such entity. You might have recognized the band's samurai mascot from their 2008 album Decimate the Weak, and here he/it sits once more in defiance of all those who would question the band's potency.

Well, I steadfastly expose my throat to the sweep of the daimyo's blade, because I am just not buying into this record. On the surface, Winds of Plagues posits an interesting merger: the blunt brutality of modern tough guy hardcore death chugging with a symphonic flair redolent of the bigger budget black metal mainstream: Cradle of Filth, Dimmu Borgir, Abigail Williams, and so forth. A curious concoction if there ever were one, and with such high visibility through the Century Media label, formidable standards of production, tight musicianship, and outside thinking, one that I would welcome were it to evoke memorable hymns to slaughter. Alas, Winds of Plague take such components and offer them in only a disparate congruence. The keyboards and the mosh-step brutality are fully in time with one another, mixed well on this fourth album, but the grace and mystique of the former can simply not obfuscate the pedestrian pounding of the other...

It starts well enough with the symphonic bombast and child choir of "Raise the Dead", but where something like Septicflesh's latest The Great Mass follows through with the execution of exotic and sweltering mystique alongside its superb guitars, this is too soon devolved by mindless chugging rhythms that would be completely empty without the accompaniment of the synths. Once the band breaks into the following "One for the Butcher", it just becomes a meandering, meathead bouncing anthem to the least common denominator. There's a half-decent thrash riff buried below the chorus, and then the band proceeds to channel a bit of Eastern mysticism with the keyboards of the bridge, but it's ultimately too much perspiration and not enough inspiration. This is the formula maintained here through other pitbound 'epics' like "Drop the Match" and "Refined in the Fire". The cheesy street struggle of the Hatebreed and Earth Crisis-derived palm mutes simply does not measure up to the atmospheric gloss above it. It's just tough guy core in sheep's clothing, the sheep being Therion or something.

Winds of Plague are not completely without talent here, they simply squander it away whole sale on their majestic, slamming drivel. For example, whenever the band breaks away from the predictable fist smashing rhythms into something faster or more thrash based, they steadily become a more inspiring outfit. The drumming here is very solid, as well as the synthesizers, provide you are the sort that goes out for such a huge, admittedly cheesy sound. The vocals are really the least impressive component, for they sound almost indistinct from thousands of deathcore and metalcore acts, and no amount of gang banging with guest vocalists like Jamey Jasta or wrestling legend the Ultimate Warrior is about to change that. I admire that these Californians are so bent on externalizing their genre to incorporate the theatrical, symphonic element, and this alone ensures that they're a more interesting act than, say, Carnifex or Whitechapel, but I am forced to wonder at their potential were they to drop the meager, frustrating mallcore overtures that no one will care about next week, and metal it all the fuck up!