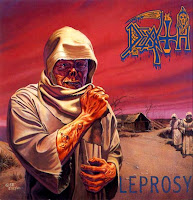 Where Scream Bloody Gore provided us with a glimpse of corpse strewn genius, it was Chuck Schuldiner's sophomore monstrosity Leprosy that would hammer in the final coffin nails: death metal had truly arrived, and with it an almost entire musical landscape would either book passage on the funeral barge or sink into the Lethe. Sure, thrash had of brilliance yet to offer, and to an extent, many considered Leprosy itself to fall under that category in its day. But as time has proven, it is by far one of the most expressive, beatific statements of brutality and evil that I've ever experienced, and I enjoy it with the same solidarity today as I did over 20 years ago. In fact, I hold it upon the same lofty plateau of carnage as I place a Consuming Impulse, Realm of Chaos, Left Hand Path, or Altars of Madness: a mastery of the genre's fundamentals, with unanimously catchy songs to boot.

Yes, I said catchy. Many might forget that the inauguration of death metal was not simply a thing of blunt, indifferent brutality or charnel atmospheres, but actual song craft. Such a large ratio of the genre's rabid followers today came into the fold in the 90s or beyond that I fear many might have taken (or still take) an album like Leprosy for granted. For example, you won't hear excess storms of double bass, blasting or technical drumming here where they're not viable. This was well before the market had been cornered by Cryptopsy or Suffocation. Bill Andrews' beats offer nothing more than a concrete foundation for the wondrous, insanely well written riffs and the thick as thieves bass lines, rolling on his bass drums where applicable. And know what? Nothing more is needed for this album whatsoever, because the star side of beef in this slaughter house is without any doubt the guitar riffing and the caustic vocal torments of Schuldiner.

They do not make riffs like this anymore, not often at least. Such simple but instantaneously memorable fare that manages to encapsulate the menace and threat of a worldly change for the worse. In today's climate of brickwalled, ProTools brutality, death metal has transformed into an acrobatic light show in which the most gallantly executed tricks are fawned over by brooding masses that forget them once the following weeks upstaging has transpired. But how many are writing a riff that might actually scare the fuck out of you? I mean, no offense to Deeds of Flesh or Behemoth (I enjoy some material by both), but if you were alone in a morgue during a power outage, would you feel terrified if their music started to play in the background? Fuck no you wouldn't. It's brutal, indeed, but it doesn't possess that same skin crawling atmosphere, conjured directly through its notation. You don't feel that instant repulsion as if being covered in spiders, or that wondrous, jaw-dropping disbelief you might have felt when watching human entrails being exhumed from their corporeal hosts by the zombies in an 80s Romero flick.

I feel that sensation every time I listen through Leprosy, for nearly the entirety of its 39 minutes. Even at its most goofy and uplifting ("Forgotten Past"), I'd need to hold your hand in the theater when the lights go out. The slow, sure chords of the title track de-Christen the album, dire melodies cycling across Chuck's bass lines before that ineffably damning death howl erupts around :40. Jesus fuck, I feel like I'm staring at my own corpse while cold, dead spectral hands are forcing me backwards into the maw of the underworld. Yet, it's all still catchy, in particular where the guitars cut in before 2:00 and the searing velocity of the riff after that. Not many bands can stop/start you this often and hold your attention. This one could. "Born Dead" arrives with almost playful deviance, a gaggle of gremlins and fiends dancing on your hide as they stab it with poisoned barbs, fast and brutal guitars alternating into the escalation of pure chord force in the chorus, and then the clinical tapping sequence after 1:00 which is legendary.

"Forgotten Past", as hinted above, is even more playful with an almost happy-go-lucky muted punk veneer to its introductory riff. However, it soon collides into a graveyard wall, and the lower bridge/groove rhythm at 1:00 is a knockout. "Left to Die" begins with one of the creepiest riffs on the entire album, a surgical thrashing that feels like you're watching some unfortunate be pumped with formaldehyde while still drawing breath. Big, swaggering grooves cede towards another of those glorious, thick rhythms, and I dare you not to explode at the chorus, one of the most tangible and enduring statements of DEATH METAL to date. "Pull the Plug" follows, one of the most popular pieces from this sophomore, another smorgasboard of splatter and horror with at least 5 unforgettable riffs, and a chorus that has probably broken as many bones in mosh pits as anything else in all of thrash or death (excepting "Raining Blood", of course). Listen to that riff at 1:20. That is all I should have to say...

Yet Schuldiner, Andrews and Rick Rozz are not finished with us here, and they burst out the meaty, meandering causeway of "Open Casket", with another monolithic, almost doom metal breakdown bridging the verses. I particularly enjoy the wild nature of the lead in this one, shrill and cavernous and resonant across the pathological plague-scape of the album. "Primitive Ways" has a similar, escalating brightness about it that we were teased with in "Forgotten Past", but once again composed front to end with perfect, plausible guitar lines and Chuck's unforgettable, flesh stalking vocals. "Choke On It" festers with some of the same, slower breakdown segues that populate other songs here, but is marvelously concise and offers another of the album's most malevolent, genius riffs just before 1:30. All of these are seasoned in a lyrical sauce similar to the debut. Still heavy on simplistic imagery, but more consistently composed.

We are living in 'old as new' times, folks, with many younger artists turning back to the past for their inspiration. But I'll be damned if I wouldn't pay a band double for an album that made such flawless use of inspiring, simple rhythms; or one that could conjure such morbid malignancy without simply steering towards the cavernous, deep guttural terrain. The production here is perfect, raw but resonating through the listener's mind like an autopsy on the television set. You want to turn away, you want to squint but you're glued to the gore, fascinating by the fleshy flaws and organs that lie within all of us. Leprosy was one of the most repulsive yet alluring metal experiences I was honored to undertake in the 80s, alongside the over the top Slowly We Rot or Cause of Death, or the thrashing unto death transition of Pestilence. It's probably cool in some circles to rally against Chuck from beyond the grave, and my own feelings on Death are mixed once he transformed into a philosophical cosmonaut on the fourth album (half forgetting what got him there in the first place), but I am sure as a starving bear in a spring thaw that this is one of the best goddamn things I've ever heard in my middle-age nearing existence. Leprosy forever. May the limbs of all unworthy poseurs fester in putrid permanence.