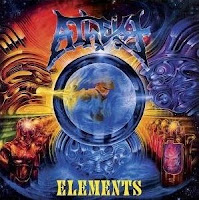 Elements has often received a bit of slack from the metal press and audience due to its extreme bait-and-switch of genre classification. However, it doesn't exactly take the acuity of a trend forecaster to see that this was where Atheist was headed, was ALWAYS headed as they had woven the threads of both Piece of Time and its superior successor Unquestionable Presence. The 'elemental' concept behind its construction is perhaps not the most novel of ideas, even for the 90s, as it had been explored as far back as classical times, but for the progressive/death metal genre it was indeed something unexpected. What's more, the fact that this was practically a posthumous effort, used to fill out their Metal Blade contract, and still ends up at the very threshold of quality is nothing short of amusing.

Go into this with a few deflated expectations from their frenetic sophomore album, and a mind open to the outside influences the band are expanding upon, and you might come out slightly the richer for it. Elements has its share of non-metal diversions, manifest mainly through interludes like the jazzy bounce of "Samba Briza", ambient guitar wailing of "Displacement" and "Fractal", or the subtle, stream-like clean tones of "See You Again". These are all quite brief, and though they do fill up a third of the track list, the remaining eight integrate Atheist's signature schizoid metallic components, albeit with a palette even wider than Unquestionable Presence. I found it curious that the band included not only a representation of "Fire", "Earth", "Air" and "Water", but also tracks devoted to another classical trilogy of elements "Animal", "Mineral" and plant ("Green"), with the title track finale serving as a curious congruence of all the above.

My biggest gripe with the album is that I didn't always feel the music itself was used as an apt aural metaphor for its corresponding substance. For example, "Green" lurches about like some stilted and confused behemoth, but other than perhaps a fantastic mental image of a walking or series of falling trees, I couldn't feel how it related. Same with "Water". I could see how the thick, popping bass-lines and swirling vortex might represent some maelstrom or whirlpool, but it did not seem to offer much submersion into this important element. "Air" is a bit more successful, despite the choppiness of its pacing, the calmer intro and ensuing structure did feel redolent of shifting jet streams or whorls of force. "Animal" becomes the most experimental as far as its architecture, with clinical, technical guitar lines woven below Shaefer's resonant tribal chaos, but "Mineral" felt a measure too playful to match its subterranean implications.

The remaining elemental representations are pretty good though, almost as if the album was intentionally back-loaded with quality. The swaying, searing "Fire' is the best single piece on the album, cast in a flux of ember-like jazzy passages and stoking furnace fusion. "Earth" rampages about with a steady, tectonic sureness but also deviates into sprightly, manic rhythms like banks of sharp crystals; and "Elements" justifies its nearly six minute length with some fascinating notation. The mix of the album is not one of its fortes, as Schaefer often feels too clanging and metallic even in elements where that style doesn't suit the atmosphere, but then, those atmospheres never feel 100% accurate to their adopted matter to begin with. Having three guitarists for this (they added Frank Emmi to the lineup) doesn't make much of a difference.

You'll never get that same, bewildered impression that Unquestionable Presence leaves you with, however I would not consider that a negative: a smoother, subtler companion was exactly what I would have wished for, and even though Elements is the band's worst overall full-length, and the band's heart was perhaps not fully involved, there are still just enough ideas to pick through to recommend at least a few listens.