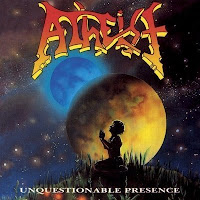 What is it about bass players and touring bus accidents? In the 80s, we had Cliff Burton whisked away from us before he had arguably reached his prime. Shortly after the dawn of the following decade, it was Roger Patterson of Atheist, whose technical grandeur and potential was admittedly limitless. It's tragic, really. Patterson got so far as to be involved in the writing and pre-production records of the band's second full-length Unquestionable Presence, but the talented merc Tony Choy (Pestilence, Cynic) was brought in to waltz about the final product. It was a sensible choice, Choy was certainly up to the task, and in a strange twist of bitter irony, Atheist had created what I must say is their best album to date, though most of them are comparable in overall quality.

Here, the band had dialed up its jazz and groove elements to bolder extremes than the debut Piece of Time, and also come up with some far more catchy guitar lines in general. You still get the feeling that you're being jerked around through the A.D.D. compositional technique that the band is known for employing. Very often some superb riffing melodies will emerge and then vanish all too quickly, tantamount to the listener's frustration. Like Piece of Time, it seems as if the band are forcing such collisions, tripping over themselves to impress the audience by how quickly they can cycle through material. A tactic which has been used countless times since Atheist, by a myriad of technical death and thrash artists trying to outgun one another in both proficiency and brutality, and perhaps this band's greatest (and most unfortunate) influence upon the genre they matured through. However, this considered, Unquestionable Presence is still an impressive album with a wealth of acrobatic gallantry persisting through each track.

"Mother Man" wastes no time indoctrinating the listener with the band's increased curvy jazz aesthetics, Choy plucking through a dazzling rhythmic flume whilst the schizoid death/thrashing commences through spikes of precision violence and Shaefer's barking snarls. As with much of the album, you've gotta listen closely to the subtext, and by this I mean the bass, it will twist your mind straight off your spine, though some might not welcome the inherent funkiness. The title track is slightly less bewildering, but more impressive as a song, with a spacey clean fusion intro marred by squelching bass and then a jamming whirlwind sans vocals, but I really love the graceful arching of the guitars behind the verse at about 1:00. "Retribution" sounds like it might have belonged on Death's Human, only far more memorable, spastic and fluid. I was a little taken aback by the teensy chugged intro to "Enthralled in Essence", but then the band almost instantly turns towards an epic melody and a convocation of desperate, shifting speeds.

At this point, the band were probably well aware that the listeners' eyes were spinning in their sockets as if they were living slot machines, so we're given about a moment of tranquility at the opening of "An Incarnation's Dream": clean guitar passage akin to something Fates Warning might have pulled around this time, and then a thick, rhythmic implosion, as if some cosmic gate had opened above a peaceful, natural scene on some unexplored planet. This track is a curious one, with a strange swerve towards funky bass, shredded solo and chugging miasma, ultimately one of the least impressive on the album, but not uninteresting. "The Formative Years" goes for a more direct, charging thrash sequence before it morphs into unhinged jazz/death oblivion, a hyperactive string of hammers that play upon your mind like piano keys. "Brains", however, is one of my favorite individual songs here, with its frenetic strains of delicate, domineering tech death that we've since heard from countless younger bands possibly one unaware that it had already been done in 1991; "And the Psychic Saw" is a wonderful closer, another favorite and I just love the glorious desperation and rapid melodic mutes beneath the first verse.

For all the shit we give Scott Burns for much of his lackluster, samey sounding productions, one must admit that he achieved his success through a number of quality recordings. In my humble opinion, this is one of his best. The guitars are clean catapults of spatial expression. The bass is omnipresent, like standing in rush hour traffic without the big city slowdown. Steve Flynn is a titan behind the kit, and Shaefer sounds great, never mixed in too loudly against the musical backdrop. Unquestionable Presence naturally deviates away from the subterranean, occult and gore soaked indulgences that the more orthodox death metal bands would pursue, asking the broader questions about life and our place within the universe. 1991 was the year that the death genre would first begin to truly explore its progressive possibilities, with Pestilence and Death also unveiling their evolutions, and while I don't enjoy the Atheist contribution quite so much as the less frantic Testimony for the Ancients, it's certainly close in quality. Occasionally too frantic for its own good, and falling shy of perfection, but this is unquestionably worth owning.