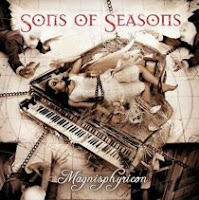 'Supergroup' styled bands don't always have a tendency to work out in the long run. Very often, some of the guest stars will simply dabble and then return to their primary institutions, leaving the lesser known members to replace them or simply hang the project out to dry. So I was a little surprised that Sons of Seasons, known for fusing the talents of Henning Basse, Oliver Palotai, and others not only held itself together for some European touring, but managed to upstage themselves with a superior follow-up to 2009's Gods of Vermin. Magnisphyricon (I haven't the foggiest idea) is ultimately just a good progressive metal effort, hoarding Basse's mighty range within the walls of restraint, and incorporating bold symphonic elements as well as harder, thrashing rhythms when it suits them.

From the description I had read in advance, I expected something truly bizarre here, but it plays out more like a mesh of Helloween, Rhapsody, and perhaps Labyrinth. Songs like "Soul Symmetry" and "Into the Void" are leveled with potent grooves that contrast the buzzing key pads or the more epic, symphonic sweeps ala The Dark Ride. They'll also use whispers, female backing vocals (Simone of Epica), and worldly music influence (the intro to "Nightbird's Gospel") to create a truly 'international' balance over the substantial duration of the sophomore, which is nearly 70 minutes long with 14 tracks. Occasionally, the lower end guitar chugs will feel pretty vacant in creativity, but they're used largely as an accent to the bass player, and the real focus is what's happening above them. There's a vibration here of fey-like dalliance which is manifest through the subtler, pretty keys, female vocals and so forth, but then you've got elements like the crushing verse rhythm in "Lilith" which leaves an almost Morgana LeFay level of bruising.

Basse reminds me a lot of Andi Deris with this one, he just uses that same, satin range of seductive elegance, and rarely transforms into the screaming banshee we remember from Metalium's finer hours. But I found his performance here the most impressive. The other musicians are quite talented, but for all the variation and obvious effort, I was not able to pluck out a good many distinctive riffs from the mesh, nor symphonic sequences outside of the more obvious like the bold intro "Magnisphyricon: Temperance". You've got the powerful, pristine studio sound here that you'd expect of such veterans or really any signed, modern band in the style, but there's a slightly pervasive cheese cast over the otherwise intelligent content. Despite the promotional claims to the contrary, I honestly found Magnisphyricon to be a more modern, traditional progressive/power album than the debut, but where it might have sacrificed some of the Gods of Vermin's unique characteristics, it slightly inches past in its overall quality.