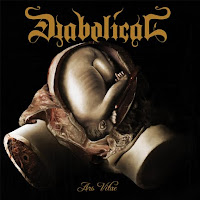 Long heralded as potential successors to the Swedish thrones left abandoned by At the Gates and Dissection, Diabolical have been steadily and readily improving themselves over the course of the last 15 years, passable efforts like Synergy and A Thousand Deaths breeding inspiration for the superior, strangely unsung 2008 opus The Gallery of Bleeding Art. Melodic death with character, composition and variation. Ars Vitae is not quite the anticipated full-length successor to that album, but instead a substantial fan package. Seeking to avoid a similar gulf as that which separated the releases of their 2nd and 3rd onslaughts, the Swedes have assembled some new studio material, a live set and their rare Deserts of Desolation EP (from 2000) to whet the appetites of a no doubt eager audience.

First at bat, the most anticipated portion: the new songs. There are three here, inaugurated with a moody, brief atmospheric intro ("Ortus"). "Sightless 6" is nearly seven minutes in length, but it handles its bulk extremely well, an opening salvo of arching, powerful mystique fording into the more subtle textures of its depths. In particular I enjoyed the somber ambiance created over the melodies around 2:00, but from that point on its a study in contrasts. "Infvitabile Fatvm" follows with a similar appreciation for ethereal beauty, a 3 minute instrumental with clean guitars and lush, droning synthesizers that predicates the driving "Eye". You'll notice at once that this trial material is a slightly different direction than The Gallery of Bleeding Art, less intense perhaps, but far more modern and atmospheric. If you enjoy Sverker Widgren's performance in the amazing Demonical, then you'll find his growling presence here a curious change of pace.

The live cuts span all three of the band's full-lengths, though admittedly The Gallery tracks dominate in quality: "Extinction", "Vertigo", "The One Who Bleeds" and "The Gallery of Bleeding Art" itself. From A Thousand Deaths (2002) they've incorporated "Children of the Mushroom Cloud" and "Under My Skin", and Synergy (2001) is represented through "Suicidal Glory" and "Ashes II". All of these tracks sound clear, consistent, and tautly executed, but if there is one possible drawback to their inclusion here, it's that a track like "The Gallery..." is simply so much more explosive that what the band seem to be writing now. To place it back to back with the more illicit, ambient futurism of the studio material seems akin to shooting oneself in the proverbial foot, but hopefully fans can look beyond this and appreciate the differences.

As for the Deserts of Desolation EP, it's pretty rough. The band's compositional talent was set in place even this early in their career, but the production is shoddy, particularly the fuzzed out guitars. The vocals feel more like a snarled caricature of their later representation, but there are clearly some excellent riffs being carved through "Guidance of Sin" and "Deserts", perhaps less so in the more progressive course of "The Dreaming Dead". All told, this is the least entertaining sequence on the disc, but for most of the band's fans, who likely don't have a legitimate physical copy of the Y2K-spawned EP itself, it's a chance for completion (though the Synergy version of "Guidance of Sin" is superior to this one).

Ultimately, Ars Vitae is intended for the band's established audience, but it certainly has a broader appeal for fans of melodic, introspective death metal. It's a good companion piece for The Gallery of Bleeding Art, but if this is your first exposure, head straight for that. As a compilation, this offers a window to where the band is going, and a glimpse of where they've been, without resorting to redundant studio tracks from the three prior full-lengths. Sure, they might have tacked on an additional demo or two, but as it stands, this rounds out a considerable 70 minutes of content. The live material is potent and elegant and the new tracks show a lot of promise. Hopefully we won't have to wait much longer for more word from that front.