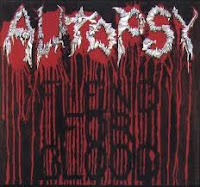 Much as the Retribution for the Dead EP served as a tonal bridge between Autopsy's first pair of albums, Fiend for Blood offered another window into the band's plausible future. The material here is a lot sloppier and unhinged than Mental Funeral, much more a barrage of straight, grisly death with a few breakdowns. Steve DiGiorgio returned to the bass position here, and you can hear his excess noodling all over the songs, a much more central presence than the restraint he showed through the debut album. One the one hand, Fiend for Blood is simply 12 minutes of neolithic torture, with nary a truly memorable hook to be unearthed, and it's the worst release of the band's crucial 1989-1992 period. On the other, there's really nothing all that offensive about it, just don't expect depth outside of Steve's copious, spastic embellishments.

As with Mental Funeral, there are a few very brief tracks here, but these at least carry some vocals. "Fiend for Blood" is a hurried little 30 second, sludgy grind track while "A Different Kind of Mindfuck" returns to a 'narrative' doom not unlike a few of the tunes on the prior two releases. "Dead Hole" is one of the better discoveries, cycling through a savage opening barrage and then stretching its offal stained wings with some swerving, atmospheric grooves. "Ravenous Freaks" is overall forgettable, with one half-decent riff in the center, the guitars colliding with the bass in a favorable pattern, then another burst of worthless insanity, and then another half-baked but pleasurable death groove. "Squeal Like a Pig" establishes a more measured pace throughout, while "Keeper of Decay" features perhaps the best of the EP's faster rhythms, DiGiorgio going fruit loops everywhere.

Aside from the admitted lack of quality riffs that I was so into on Mental Funeral, I also don't enjoy the tone here of the guitars. It simply does not stand out whatsoever. Contrast these droning, sludgy patterns with the thundering bottom end, and it all feels fairly half-assed, as if the band just wanted to fill some space before their next album. The cover art also sucks, where Retribution for the Dead was quite cool; but it's not like many bands put much effort into the packaging of such short form releases. Assuming you haven't already picked this up in the past, then I'd advise you just pick up the re-issue of Acts of the Unspeakable which includes this entire EP as a bonus (and more on one of the versions). Autopsy's third album does continue the wacky trend of dumbing down their impressive sarcophagi of sound, but there are far better songs and less of the bass playing excess.

Verdict: Indifference [6/10] (my lips pressed to your laceration)