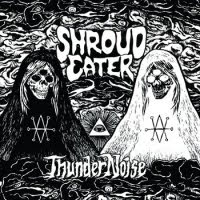 Miami is not a location that I'd normally consider some hotbed for primal, overpowering sludge metal, but Shroud Eater are certainly out to rub our faces in the possibility, with this loud as bedlam debut of psychedelic, oozing rock. Incorporating all of the three tracks off their s/t, 2009 EP with eight other compositions, the trio strives to conquer its audience with their massive, frontal and debilitating guitar tones, blocky and blockbusting. Vocalist/bassist Jean Saiz barks out vocals akin to old Monster Magnet or Helmet, and in fact one of the first comparisons I was drawing into my mind to was some hypothetical, female-fronted Helmet tripping on acid. I won't lie, at times I found her patterns mildly monotonous; but doped up and angry is something she clearly achieves, as if she were playing catch and response with Janette Valentine's wall of crunch and Felipe Torres measured grooves.

From the great cover art of this album I was expecting something akin to Acid Witch, but there is no involvement of death/doom, just straightforward, accessible volume delivered through blunt but effective riffs. There's nothing really intricate happening within Shroud Eater, they just want to beat your skull in and then take a smoke break. But despite this, they are not above some variation. "High John the Conqueror" and "Vesuvius" apply their boots to your head with flowing simplicity, but then the band shifts to sludgy feedback to inaugurate the next track, "Cyclone", and "Shark Valley" introduces an entirely new side for the band: ringing, engrossing clean guitars that curve into some rocking pickup riffs. From there they return to the cranium surfing, colossal tone of "We Are Beasts", and here Saiz applies a little frightening echo to her voice that carries her up to the rafters of consciousness. Other favorites here are the lovely instrumental "Oubliette" with some Mastodon or Tombs-like rhythms; and "Sinister Hunt" which is so excessive that the recording almost seems to collapse.

It's pretty enjoyable for a debut album, especially if you're not demanding anything complex. Where the band does seem to lag behind a little is in providing something unexpected around the various curves that the songs often take. I can't stress enough how far a few more layers of haunting melody, or deeper psychedelic passages would take an album like this. I kept cruising along, bobbing to the grooves and thinking to myself 'gee, if something amazing happened here then I'd probably cream my shorts', but rarely if ever did such a surprise transpire. The potential is here for a sludge explosion. Despite the incredibly crudeness of the composition, there are riffs here that hook you just on their overdrive alone. You can certainly drop in and tune out to the ThunderNoise, if you're not so picky. But a more varied vocal palette and some less predictable structure would definitely not hurt their chances at blowing up the damned map.