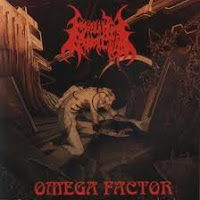 The 1991 7" EP Necrosphere showed genuine promise, some of the most weighted, atmospheric US death outside of Pennsylvania's mighty Incantation, but it was hindered by terrible production. Still, the incredibly ghoulish guttural vocals, searing riff tumult and spacey synthesizer segues exhibited something we hadn't heard much of back in those days. When it came time for the band's proper debut, they were snagged up by JL America, a fledgling label carving their mark through the US underground with releases by Acheron, Morpheus Descends, and others, not to mention their European licensing of titles like Beherit's The Oath of Black Blood. What's even better, though, is that Killing Addiction represented a real second wave of Florida death, one nearly as crushing and compelling as its flagship generation, with a whole new world of disgust in store for the audience.

Unfortunately, Omega Factor does not fully deliver on all of this potential, and thus the band was never able to create large waves about itself. There are several admirable components on the debut: killer sci-fi/horror cover artwork, great logo, solid and intelligent lyrical expression, and most of us, utter brutality. But these qualities are sadly counterbalanced by a still lacking production and a dearth of truly memorable riffs. Killing Addiction trawls along to bludgeon you with crushing focus, while interspersing more technical, surgical guitars through the walls of slamming grooves, but the patterns never quite manifest into anything more than mosh fervor. "Nothing Remains", "Equating the Trinity" and "Altered at Birth" all have their share of old school aggression, taut performances and Pat Bailey's frightening, scrawled out growls, but there are no individual tricks that one can really point out as exemplary or lasting.

A few of the Necrosphere tracks are re-recorded here: the titular "Necrosphere", which has a supreme lead sequence, and the longer "Impaled". But both lack the same devious sci-fi cheese that they once adorned, and I was actually depressed that this aesthetic was not woven through the whole album, else we might have been presented with a more grisly alternative to fellow Floridians Nocturnus. Omega Factor is far more straightforward, and while that's not a bad thing in of itself, it just doesn't stand out. Also, while the mix is arguably superior to the EP, it still sounds rather amateur and scraped together. The drums often feel clunky, and the guitars tone is almost too overdriven, too crunchy if you could believe that. Having said this, it's still a good enough record to track down if you're hellbent on hunting old school gems that you might have missed. Memorable it is not; musically it's of a one-track mind, but it's a fun preamble to the entire atmospheric, drudging death wave currently trending, and brutal enough to sate the more cannibalistic underground mutants who laud the genre.