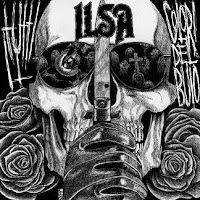 I don't know what exactly it is that has Washington DC crust fuckers Ilsa so peeved, but this is clearly one of the most crushing, angry albums I've heard in recent months, as far as volume and unrelenting throughput. Tutti il Colori del Buio is the band's sophomore, and it stands for 'All the Colors of the Dark', named for a 1972 exploitation film (not an uncommon practice among the young grinders, even Trap Them shortened their name from a '79 flick). Ilsa write from a number of influences: you can hear the craven, nihilistic drudge of Eyehategod, the harried fuel of traditional hardcore, and quite a few traces of pure death and doom throughout, pumped from the primordial veins of Asphyx, Burning Witch, Entombed, etc.

The album's strong point is clearly in its production, because it sounds enormously grimy to the point that it can literally knock the listener on his/her ass. Impressively raw, fibrous guitars deliver a mix of sludge and Sunlight Studio tone that is perfectly adapted for the negativity this band exudes like a tangible plasma that you'll be peeling off your skin and out of your ears for days after hearing it. Simply disgusting, the kind of disgusting that will wake you straight out of your stupor and straight to suicidal detachment like Dopethrone or Take As Needed for Pain once did. Unfortunately, this and the tortured grasp of Orion's sour, monotonous vocals are about the only elements of the album I really took away from it. The actual guitar riffs all suffer from a derivative, familiar feel, with nary any interesting deviations or randomness applied, from the stock chugging of "Blood Rituals" to the d-beat drive of "Butcher's Castle". You can hear almost every transition from a mile away, and leaves too much up to the atmosphere...

...and as destructive as that atmosphere is, it is simply not enough to overcome the writing. Don't get me wrong, if you're looking for a mindless slog from Blood Duster to Electric Wizard, from Goastnake to Bolt Thrower, with no surprises in store, then Ilsa has your back. The sheer weight of this violation makes stuff like Isis, Mouth of the Architect, and Trap Them sound like a daycare clinic; yet the sense of drain, of exhaustion that one feels when emerging from this experience leaves little desire to return to it. Hey, I admire any band that names a song "Frostthrower", but I would love to hear them transition into something less obvious, perhaps a sequence or two that fuse a few subtleties into the monolithic, swelling outbreaks of wretched emotion. Clearly this band has the 'sound' to frighten the world and sent shudders down the spines of underground dwellers everywhere. Now they just need the songs.