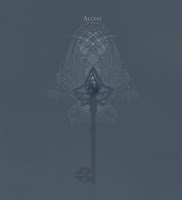 With all the hype surrounding Alcest and its creator Neige (no fault of his own), you'd think the man was on to some sort of messianic formula to invigorate the whole of underground music internationally. In truth, this is very far from the case, and I suspect that at least some fraction of his audience is simply mind blown by a lack of exposure to Alcest's primary influence: the dreamy, ponderous sensitivity of shoegaze. You see, the 90s were pregnant to burst with bands like Lush, Catherine Wheel, Cocteau Twins, Slowdive, My Bloody Valentine and The Jesus and Mary Chain, not to mention a whole host of college 'alternative' rock (The Cure, etc), many of which have threads to what this Frenchmen is writing. Bands like Denmark's Mew continue to broadcast wonders of this style in new directions like prog rock, but Alcest channels it towards his own personal past within the black metal genre. He is not alone in doing so, but clearly he's the most popular.

Le Secret was the first official release from the project, and Neige has recently re-recorded the material for release through Prophecy Productions. It makes sense, since many of the drooling come-lately fans are likely not to own the original. Thankfully, this re-issue includes both versions, so one can simply compare and contrast between them. The differences are more than just tonal upgrades, though, there have been ever so slight tweaks in the structure of the songs, but not so much that devotees of the older recordings should flip their wigs in anxiety. A few seconds snipped or added here, a riff altered there, and presto. Personally, if forced to choose, I would probably run with the prototypes, since they carry a more desolate nature to them that seems marginally more authentic. However, the re-recordings certainly bring them flush with the Alcest sophomore album Écailles de Lune released last year, and the updated cover art is appreciable.

As for the actual quality of the tracks themselves, I fear I am in opposition to the blessed whole. Pressing aside the absurd concept of a young boy's adventures in Fairyland, which is the actual inspiration behind Neige's lyrics for this project, the two tracks seem to drone on endlessly via their sugary ministrations. Granted, there are a number of moments peppered throughout in which the mix of clean, cloud touched vocals really comes together with the streaming melody of the guitars, but they breed ennui more often than revelation, and when deconstructed, they have little, individually, to offer. Aside from it's shining, repetitious escalation, "Le Secret" itself has painfully few riffs that hold up to scrutiny when disembarked from their environs, and thus I feel like the 13+ minutes are just an endless ebb and flow of half-baked post-black majesty that are quickly squeezed into the corner of my imagination and then forgotten; a pretentious if passionate miasma void of twists and turns, surprises or subtle delights. The shimmering of a rock candy, sweet to the tongue, that I would never wish to finish, and the cyclic intro/outro of reverbed acoustics does nothing to strengthen it.

"Elevation" fares slightly better, though it also suffers from the needless excess as its precursor. I fancied the angelic intro sequence, and was satisfied that Neige through in some snarling as the lifestream of crashing chords arrived. I also found the bass lines intricate and amusing, but after about 5 minutes of this, all attention was lost. There is simply nothing compelling harbored in its depths, and it sputters along like the diminishing returns of an oil tank with a major leak. Yes, I realize the popular pastime is to lie strewn about some grassy knoll absorbed in the melancholy of missing childhoods and puffy clouds, and I've done this numerous times to the recent M83 record, but I have never felt availed by any of the purported, hypnotic effluvia of Alcest. For a work of pure ambiance or narrative grandeur, I'd be more than willing to accept such swollen excursions, but this is neither. Oh, I 'get it', I get it just fine, and I'm the last person that would accuse Neige of lacking creative compulsion in his efforts. Nonetheless, I find Le Secret to be about as mundane as music can get without become actively dopey or offensive.