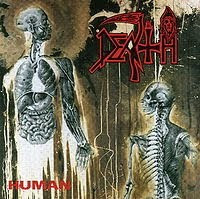 In all the years I've listened to metal, through all of its mutations, there are few cases where I've felt so at odds with the 'majority' as with Death's fourth full-length Human. I have a number of friends and acquaintances who honestly feel this is the greatest album of all time. Accolades have been written from here to kingdom come and back again, and in lieu of Chuck Schuldiner's tragic passing it has vaulted into even more of a concrete classic status. I suppose here is the point at which I could just claim that they're all full of shit, that it's some kind of conspiracy, 'Body Snatchers', whine like an infant and then go grab some lunch, but it's not that simple. Because Human does not suck. It is not the product of effortless self-preservation, nor a brain addled deviation of form. It is not crass or commercial. It is not a sell out. And it is not uninspired, nor uninspiring.

What it is, is a progression gone awry. A sacrifice of ghastly mood and virtue for ambition. But more importantly, it's a fairly underwhelming piece of music from a band that had to this point been frankly fucking awesome. As early as Leprosy, Death's conceptual motivation (and lyrics) had swerved subtly to a more philosophical standpoint on mortality, which was then brought into social and technological, cultural relevance through Spiritual Healing. In fact, you could see the transition to Human from a mile away. Knowing Chuck's motivations to grow and evolve the terrain of his musical alter ego, it was inevitable. Hints of the sound here were seasoned across Spiritual Healing: a thinner, more processed and by extension less powerful guitar tone, less festering or effective vocal tones, and more frequent flights of instrumental fancy. The 'death' metal that I so loved from the earlier works still survives here, but it's rapidly becoming the subtext of the band's dynamic, rather than its foremost aspect.

With Scream Bloody Gore I had a bloody good time; Leprosy was a genuinely creepy, beautiful and brutal experience; Spiritual Healing less so, but still had the songwriting that hung out in my skull years later. Human is the first case in memory in which I felt I could surgically extract a few individual riffs and feed the rest as scraps to the hounds. But not only does this album mark a shift in aesthetics, but also in how Chuck would select musicians to work among. In what might seem a fit of abashed elitist snobbery, he had begun a revolving door of musicians here that would continue through the rest of Death's career. Bill Andrews, Rick Rozz and Terry Butler had turned towards the lackluster Massacre with another former Death-ite (Kam Lee); so a bevy of technically fluent individuals had been hired on to 'flesh out' this excursion. Steve DiGiorgio of Sadus for the bass guitar. Cynic members Paul Masvidal and Sean Reinert for the guitar and drum slots. An impressive quartet as far as individual musical proficiency is concerned, a 'Dream Team' like one might send to the Olympics. So then, why does this album supplant the charm of its predecessors which such a dry, mechanical, mediocre sensation?

Thankfully, Human does not abandon all of the band's prior assertions. "Flattening of Emotions" opens with some tinny sounding muted death and a good number of robotic transitions, spliced in its depths with easily forgotten wanking. I think the only part of this song I enjoyed was the sad current of melody beneath the chorus. "Suicide Machine" is better, perhaps the closest this CD gets to what I so loved on the older albums, with a few creepy old school death rhythms (the chorus) and slices of eerie if predictable melodies. Still, though, the notation here is simply not as morbid and memorable as what had come before. I enjoy the driven, death metal break of the "Together as One" verse, with DiGiorgio plunking all over it and Reinert as taut and puckered as a newly molded sphincter, but I found myself caring less about any of the remaining riffs here. Ditto for the entirety of "Secret Face", which I had entirely forgotten until I dusted off the album to prepare this review.

"Lack of Comprehension" is initially promising due to the desperate interaction of vocals and rhythm, but outside of that opening riff and the mosh breakdown at 1:30 with the frenzied guitar accompaniment its like a boring philosophy lecture, and I'd have to say the same for "Vacant Planets" and "See Through Dreams", with the exception of that epic, melodic swerve at about :50 in the latter. Of course, we also have "Cosmic Sea" the first outright instrumental found on the Death studio albums, and probably the one track on this album that I would actually spin the disc for. The guitars create a meandering scar-scape of sadness and beauty, and I enjoy the synthesizer sounds utilized in the backdrop. The leads are impressive, especially when they start warping through wormholes around 3:30, and DiGiorgio also fashions some mesmerizing effects to anchor the cosmic convocation.

All in all, the tone to this album is arguably its most crippling feature. Scott Burns mixed it, and I'd be lying to say it was one of his finer moments. Razor thin and very much devoid of power. In fact, had this been executed with bolder guitars in mind, and less of a nerdy modernism in the processing of the distortion, the same songs might be somewhat more potent. Not that the actual riffs are exemplary, but they're ironically more mechanistic and less 'human'. Post-human, if you will, as if some band of A.I. infused automata mining Jupiter caught wind of some Spiritual Healing broadcasts and decided to creature a 'spiritual' successor to that album. Hypocritically, I don't mind this diffused digitization so much on the following works Individual Thought Patterns and Symbolic. But only because I like the songs on those records more than these.

I have given Human more second chances, third chances, and twenty seventh chances than almost any other record I own, but each time I return to explore it I am left wanting. I've found the material to also be dull in the stage setting a number of times I've seen the band (once even opening for them at Salisbury Beach where a lot of booked tours came through), though they always compensated with older tunes. I'm certainly not opposed to progression in my music: the two other 'major' prog/jazz/death albums of 1991 sat rather well with me (Unquestionable Presence, Testimony of the Ancients). Human is elegant, and never rushed, but neither is it an exciting listen. It's not the worst of the Death efforts, but I'm simply not hard wired to appreciate it beyond a handful of the riffs and lyrics. To me, the Death I truly loved dissolved the year prior, not that Chuck was ever going to brook a wrench in the gears of his evolving musical landscape, but I wouldn't have been opposed to keep him penned up for a few more DEATH metal albums.