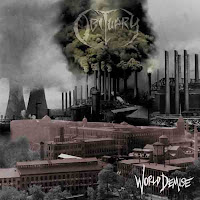 By the time World Demise rolled around, the audience for extreme metal had already begun to change far and wide. A lot more punk and hardcore kids were attending the shows, in my region even making up the bulk of any death or thrash gig attendance, and it only makes sense that bands would begin to adapt. If you'd been to a performance by this band in the mid to late 90s in the States, then you know exactly what I'm talking about. Now, I'm not accusing Obituary of some chameleon strategy, and a band cannot necessarily choose its audience (nor should they), but there can be no dispute that the band was beginning to incorporate an increasing amount of heavier grooves into their songs, perfectly suited to the mosh tastes of a wider fan base seeking the release of youthful testosterone (or estrogen) over the endurance of lasting, legendary music.

On the one hand, World Demise creatively channels the underlying themes of their classics Slowly We Rot and Cause of Death into an urban bricklaying force, with a near excess of manly swagger. We had already been inundated with the hilarious "Don't Care" from the EP of the same name earlier in the year, but here it sits atop its proper throne of primal, driving grooves and crude but effective chorus. John Tardy sounds quite good here, as he does on the concrete crushing of the title track, another of the clear favorites here for the relationship of the descending chugs and resonant growling; and a great pure old school, creepy death bridge. Other pieces of note include the almost hypnotic sway of "Lost", the warlike percussion of "Redefine", and of course "Final Thoughts", with the hugest and most menacing groove on the entire album. Most of these do suffer from a faint reek of useless repetition, and in most cases :30 seconds could have been snipped to greater effect, but they're all fun enough songs that the album was almost instantaneously more memorable than its dull predecessor The End Complete.

On the other, I really would have liked more fast material on this album. It's all too rare that the band will surge into one of their morbid and wild, frenetic scenarios, like the bridge to "Solid State" and its winding, deceptively sloppy lead sequence. There are some decent old school rhythms here that hearken back to the heyday of Xecutioner and Death ("Set in Stone", etc), but not enough. A lot of 'one and done' tracks choke off the album's efficiency: "Burned In", "Paralyzing", "Kill for Me", "Boiling Point" are not incompetent, but they suffer from familiar vocals patterns and tempos that have already been done better (by this very same band). As an EP with 6-7 songs, this would have been all I could hope for, but the 51 minutes of its entirety are swollen with redundant ideas and a decided lack of restraint.

Scott Burns had a hand in the recording here, and it's another success for him, ably capturing the band's broad Hellhammer guitar tone and vocal dynamics. Despite the simplicity of the song titles (not a first for Obituary), the minimalist lyrics are rather poignant, a disjointed poetry, though there is no question the band was aiming for a more socially conscious subject matter than their past albums. The cover art is probably the worst of the band's career (even suckier than some of their post-hiatus flops), but it too reflects this shift towards matters of importance with impunity. All told, World Demise is far from the worst of Obituary's full-length excursions, but neither is it consistently engaging. A scant few tracks belong among the band's career highlights, and the rest snuggle comfortably into oblivion.