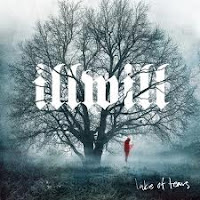 The career of Sweden's preeminent psychedelic Goth doom mobsters Lake of Tears has long been one of climaxes and fallouts, perhaps phased to the cycles of the moon, perhaps dependent on how drunk the members are during their songwriting process. Having seen the cover art for Illwill, their eighth full-length album, I was not holding out much hope for the quality of its contents. Sure, they've had some stinker imagery before, like the lazy cover to Black Brick Road or the incredibly boring photograph gracing Forever Autumn, but this looks more like a new album from the Swedish supergroup Illwill than anything else, a fat cheesy logo interspersed with the limbs of some suicide tree...how do you go from beautiful hippie distractions like A Crimson Cosmos and The Neonai, or the cosmic ball tripping of Moon and Mushrooms to something so drab?

Speaking of that last album, it was phenomenal, and the emotional resonance of tracks like "Children of the Grey" and "You Better Breathe While There's Still Time" had me chomping at the bit for more. Finally, the band had closed the gap towards the authentic power they wielded through their earlier output. Illwill was one of my most anticipated albums this year, but I'm sad to say that it's a letdown. Perhaps not so much of a disappointment as Forever Autumn had been after the brilliance of A Crimson Cosmos, but an eyebrow raiser nonetheless. To be fair, there are a few solid tracks that deliver the mood rock we expect, and the general tone of the album is redolent of Moons and Mushrooms, but a lot of the life leeching here comes in the form of its experiments. Lake of Tears have decided to strike up the tempo and explore some terrains alien to their backlog, so we end up with the speed metal (honest to Gods) of "The Hating", or the meta-black metal thunder of "Midnight Madness", which reminded me of the Wolfheart era of Moonspell, sans the goofier gothic vocals, and in which Brennare borders on sheer rasping.

Now don't get me wrong: if these Swedes wanna fuck around with pacing and attempt to crack a few new nuts, nothing should stop them. The issue is that these songs are simply not very good. The guitar tone and velocity of "The Hating" seem initially exciting, but they don't pan out over the course of the track. Likewise for the uplifting punk fuel of "Parasites", or the driving rock of "Floating in Darkness". All are rich sounding due to the mix, and possess subtleties similar to the huge rock of Moon and Mushrooms, but the vocal lines and riff patterns seem to drag. Luckily, the band has not plummeted entirely off the deep end. There are some sultry rockers like the Pink Floyd influenced "House of the Setting Sun" or the accessible Gothic sway of "Behind the Green Door", with fun but cheesy lyrics that seem to center on the finer sex (or possibly the Marilyn Chambers flick). Then you've got some borderline fare, like "Taste of Hell" which mirrors the mighty "Children of the Grey" with a few rasps, but far less memorable structure; or "Illwill" itself, with a steady driving melodic wall of force that has much precedent throughout their discography.

It always pains me to be underwhelmed by a Lake of Tears record, because when this band is 'on', they are one of the best in the world at delivering deviously simplistic Gothic doom rock. I know that when the watch-fires of inspiration are lit, they are fully capable of kicking my ass and having me sing along for the next decade or more. To be fair, this is not so vapid an album as the navel gazing Forever Autumn. There are a couple moments where I was bobbing my head along, absorbed in the weight of the chords and lyrics. But it's no more than 'okay', equivocal to their 2004 effort Black Brick Road in impact. No "Sweet Water", no "Cosmic Weed", no "Devil's Diner", no "Head One Phantom"; nothing to keep the attention engaged until the band's next creative outlet. The blame can't be wholly placed upon the shoulders of their experiments in acceleration, the broaching of other genres, but neither does that benefit the content.