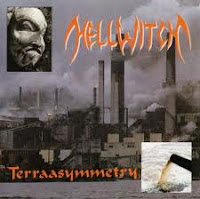 It's curious that Hellwitch were unable to achieve greater notoriety when similar, manic technical thrash and death acts like Atheist and Nasty Savage had been given a turn in the spotlight. Chalk it up to underexposure, and as the cover of the obcure Terraasymmetry EP shows, some fairly underwhelming aesthetic choices. Syzygial Miscreancy had been ugly enough, but its followup is simply hideous to behold, it not without a meaning relevant to the title track. Here were three tracks much in the vein of that debut full-length, though less cosmically inclined and explosive. And aside from the following year's Anthropophagi demo, this was the last of the band's material before a near decade of creative slumber.

Terraasymmetry definitely possesses the same frenetic choppiness as you'd find on the band's debut, though marginally less atmosphere. The riffs and themes are comparable to a few of the Northeast's underground dwellers Terrahsphere and Atomicaust, with a very organic, if not impressive guitar tone and various six-string acrobatics performed in conjunction with a taut rhythm section matching nearly every note. Of the three tunes, "Terraasymmetry" itself has the most to offer with a swarm of storming blasts and frenzied undercurrents bisecting a wide range of dynamics, from the death metal breaks of its midpoint to the thrashing groove at its close. "Satan's Wrath" is a far simpler song, the slicing melodic leads are sweet enough but the rhythm guitars are forgettable; while "Dawn of Apostasy" initiates a fruitful charge into a percussive, vibrant thunder of start/stop rhythms like a night at the asylum with no medication, nearly the equal of the title track in overall quality, especially the mid-paced swerve into total thrash at around 1:30.

The vocals are much the same as before, with perhaps less screaming, and the production, while even enough to make out the three instruments, is sadly in need of a little glow. Functional, but not inspiring enough to benefit the effort the band places into the raw complexity of their song structures. As a standalone rarity, this EP is not worth tracking down. However, if you've been unable to find either this OR their debut full-length, you've got another option: a compilation called Final Approach, released in 2003 through Progressive Arts, which features both, in addition to several demos worth of material from the band's formative years in the 80s. As a compliment to Syzygial Miscreancy, there is a trace of value to these three tracks, but they're nothing special when once could instead invest in Piece of Time, Unquestionable Presence or the thrashier Nasty Savage records like Penetration Point or Abstract Reality.