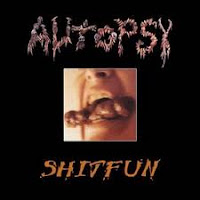 Well it IS shit, but it ain't so fun. Autopsy's 4th album might be a meager half-truth in advertising, but it's not at all surprising when one considers past tangents (the Fiend for Blood EP) or the direction the band was leaning towards with Acts of the Unspeakable. Punk and sludge had become the dominant flavor in the band's developing devolution, and while there are fewer aesthetic differences in the lyrical concepts of Shitfun to its predecessor, it does feel as if the spade wielding, festered cemetery caretaker of the California crew's formative years had been supplanted by a gaggle of delinquent trailer park pukes who think its fun to eat poop and explode frogs with firecrackers or what the fuck ever to pass the empty days.

This distinction is largely musical, as the lyrics offer the same mix of rambunctious annoyance and a more methodic, ghastly obsession. Reifert continues to communicate with a balance of his early gutturals and splattered punk narrative, but even when he's pinching a groan out it does not seem to have the same effective power as Mental Funeral or Severed Survival. Shitfun has 21 tracks on it, and in my opinion that's about 13 or 14 too many, because as hard as it might be to believe, there are some atmospheric moments amidst the slovenly coprophilia that manifest the creepy overtones of the past, in such installments as "Humiliate Your Corpse" or the slow, drudging "Praise the Children". "Blood Orgy" and "Maim Kill Maim Rape" both have a bouncing crepitation to them which proves worthwhile, but the majority of the tracks are laden in wholly forgettable punkish or dull proto-doom slop that immediately exits brain left. Songs like "Shit Eater", "Geek", "Bathe in Fire", "I Shit On Your Grave", "An End to the Misery" and so many others have about 5-10 seconds of plausible but effortless creativity that offer only a fraction of this band's net worth from the older albums.

Shitfun really feels like a band bored out of its mind, but not so mindless of its audience that it would abandon its prior dynamics entirely. There is a pretty good reason for this: Autopsy had already decided to call it quits, and transition into their new incarnation Abscess. The material here is little more than a transitional galleria of grotesque odds and ends that would not have complemented the value of either Acts of the Unspeakable or Seminal Vampires and Maggot Men. A depot for half-formed ideas. A clutter gutter. A heavily swollen contract filler with no ambition other than soaking in its own bodily fluids and stinking up its environment. Honestly, I'm amazed that this album doesn't 100% suck, but at the same time I'm glad that the members had realized their interests lay elsewhere and cut the lifeline before releasing something even more sill than this. These days, we have Autopsy back doing what they do best, so it's kind of difficult to hold a grudge over this misstep, but of the 55 minutes here there are only 10-15 not worth an immediate flush down the the maw of the nearest porcelain deity.