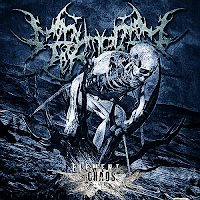 I was recommended this band by a person wondering "Why have I never heard these guys before?!" My almost immediate reaction was quite similar ("Shut up and take my money!"). Hailing partly from Ukraine and the US, Monumental Torment is everything Brain Drill tries to do - insane sweeping riffs, relentless freight-train drums, etc. etc. - but actually fucking does them well. In every way.

What I Liked:
The guitars (Artem Gultaev) shift from the deep groovy low riffs up to relentless sweeping to endless tech death riffs. This is the fastest tech death I have ever heard - to the point that the drums are programmed since no human could ever keep up with both what the guitars play and with what the programmed drums output (think Anaal Nathrakh not Weeping Birth). The other part of the rhythm section, the bass (Ioann Komkov), is just as musically impressive nestled quite comfortably right in the front of the mix - check out "Nameless One" for proof. I quite enjoyed the sparse keyboard passages played by bassist Ioann Komkov which I found almost gave the whole brutal tech death metal album a neoclassical feel though nowhere near the extent as say something like Fleshgod Apocalypse.

What I Didn't Like:
For the most part the vocals (Lloyd Moore Jr.) were good, flowing through the sweeps and the programmed drums with a solid brutal growl that was never drowned out in the insanity. My problem was that the vocals stayed almost entirely in that brutal growl and never really deviated or experimented save for a few passages her or there (ie. minimal layering) - and for an album otherwise quite unique, I found this to be extremely disappointing though ultimately not a serious issue.

If you only listen to one song, just listen to the title song, "Element of Chaos". This is what this album embodies - the music form of the element Chaos played by two Ukrainians and an American. There's not much more to say other than:

So why have I never heard these guys before?!

http://www.myspace.com/monumentaltorment
Posted by Narian at 2:09 AM