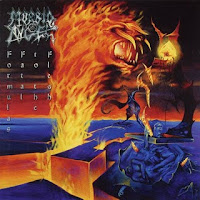 While I freely admit to loathing the shit out of this album for many years, I think it's important to take into account what transpired to lead into its creation. Long-time bassist/vocalist David Vincent had parted ways with Morbid Angel, moving on to help his wife out with the Genitorturers. This led to the search for a replacement, and thus Steve Tucker was brought on, leading to some derision and division among the fan base. Vincent left some huge shoes to fill, and through his three studio albums with the band, Tucker has done his best to do so. He's got a similar, deep vocal tone and four string acceleration suited well to their style, but I simply don't feel that he was given the most interesting material here to work with...

So I didn't have high expectations for what I'd be hearing, and after the insane deluge of hype and press surrounding its manifestation, it was a rather enormous disappointment. An even further experimental work than Domination, which received mixed responses (it happens to be one of my favorites in the band's discography, with a wealth of memorable content I still listen through on a normal basis). That said, after about a decade of numbness towards Formulas Fatal to the Flesh, I have so slightly warmed to its molten Mythos evocations. Not warmed to the point that I'd consider it a good album. I'll stand by the opinion that it's the worst they've ever recorded. But there are a handful of metallic tracks here with interesting components, and Sandoval seemed to set himself some new records for manic, inhuman blasting. "Chambers of Dis", anyone? Fucking ludicrous, in particular his ability to shift on and off these rhythms (i.e. "Covenant of Death").

It's honestly the most 'showy' Morbid Angel album, with extremely brazen, clean production values that surpass the swampy depths of Domination and the flat and average Covenant or Blessed Are the Sick. The guitar tone is fibrous and crunchy, yet loses nothing in the fits of sheer speed that populate the compositions. Admittedly, the bass lines are predictable and boring, rarely given the top billing, but then, so too were Vincent's. What really drags the album's flow under would be the ambient, instrumental vignettes which feel amateur and cheesy, and don't seem to mesh into the metallic onslaughts. I'm speaking of the forgettable "Disturbance in the Great Slumber" and its shoddy, uninteresting attempts at synthesized chaos, or the flighty and sporadic guitar instrumental "Hymn to a Gas Giant", or the VGM-like "Ascent Through the Spheres". About the only interlude of interest would be the "Hymnos Rituals de Guerra" and its warlike, programmed percussive sensations, but even this could have done with some better atmospheric accompaniment. In short, these all should have been snipped free of the album, and the metal left to do the talking.

I've already mentioned "Chambers of Dis", and it's the one song I would take away from this album and include on a career highlight reel for its voracious swiftness and diabolic thundering urges. It's also one of the few points at which this album recaptures the sinister miasma of their legendary Altars of Madness, trumping it in sheer force, with bristling leads and a whirling muted barrage deep in the bridge that creates a sense of vertigo, of falling into the unknown. But for this, there are a number of faster, less intriguing pieces present. "Hellspawn: the Rebirth" is pure Morbid Angel, an old tune given official release at long last, but the majority of the riffs lack distinct character, and the same goes for "Heaving Earth". "Covenant of Death" is about half kick-ass, while the slower, crawling fare like "Nothing is Not" or the epic and bizarre "Invocation of the Continual One" are sure to lose a few minds in their labyrinthine corridors.

My own gray matter cannot be counted among the victims, I'm afraid. For all the variation the band have brought together, Formulas Fatal to the Flesh as a whole feels disheveled and rushed, as if a majority of random riffs and elements were packaged together with mildly conceptual libations to beings that don't exist, and some decent lyrics ("Nothing is Not", "Prayer of Hatred"). Punishing if you just want your eardrums kicked in like the pedals beneath Pete Sandoval's feet, but largely lacking in the malevolent dimensions that made their debut album (and Domination) so great. From a technical standpoint it bears its burden, and it seemed stifle the concerns over the band's new front man. But in the long run, I've found it nothing but an experiment in controlled chaos, a buffet of brutal scattershot urges with little cohesion. An opiate of atrocity with no lasting addiction. Mediocrity unbound, served with an ADD additive.