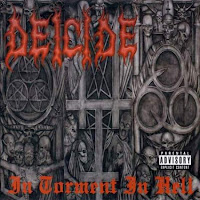 The rational minded among us might suppose that, a single year after one of your flagship death metal acts released their most mediocre effort to date, you'd want them to take to their time when next they enter the studio. If the members of Deicide are to be believed, this was not the case for In Torment In Hell, a purported rush job at the bequest of Roadrunner. Why am I not surprised? This is the same label, after all, which rose (or fell) from genuine greatness in the 80s to one of the trendiest cash whores in all the extreme music industry. The label that, two years hence, would release the worthless 'Best of' Deicide compilation to squeeze a few more bucks beyond this heap of negligible returns...

As it turns out, though, the production and the album art (which isn't frankly all that bad, merely a re-integration of past cover symbols) are not the only impediments to this wretched low. The songwriting is equally to blame, a collection of mundane and uninteresting riffs that offer nothing the band hadn't already delivered in exponentially greater quality on their formative releases Deicide (1990) and Legion (1992). In fact, the music here is so mediocre that it makes the vapid, ridiculous leads sound positively angelic by comparison, as wild and meaningless as they tend to be. In Torment In Hell is perhaps closer to the band's roots than as Insiniteratehymn, but where that album still had the capacity to bust out a half-decent guitar pattern, these are treacherously forgotten within seconds of their passing. Your typical mix of grooving chugs over double bass and explosive old school speed picking that in no way comes off effectively malevolent or even muscular (arguably the band's one strength on their better works).

The vocals might occasionally resonate along with Benton's finer performances, but their meter comes off wholly generic and derivative of the band's back catalog. I'm seriously hard pressed to think of even one riff I appreciated on the album. Even the tighter tracks like the mosh intensive "Let It Be Done" and "Imminent Doom", or the thrashing closer "Lurking Among Us" fall flat on their inverted crosses. Don't even get me started on the title track, which is perhaps the worst on the album, a poor choice for an opener. As the band would agree, the mix sounds like shit. Pick any random demo from a brutal death metal band around the turn of the century and you're likely to find better. I like the zip of the leads, but only because their frivolous tone makes them stand pitchfork and horns above the rest of this lazy, lamentable lattice. Deicide have released other disappointments through their career, but this might have given Jesus the last laugh if they hadn't decided to survive through it.