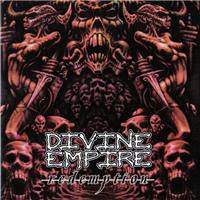 Divine Empire was formed as a splinter project of Malevolent Creation, by three of that band's 90s acquisitions that inevitably grew apart from Phil Fasciana's vision. Jason Blachowicz, John Paul Soars and percussion god Derek Roddy had cut their teeth together on the 1997 album In Cold Blood, and decided that their cooperative jamming cohesion should spin off unto its own entity. Now, from a sheer stylistic perspective, there is not a lot of difference between this album and a number of Malevolent Creation works like The Ten Commandments, Redemption, and Eternal, but the sound is even closer to the infamous Deicide, to the point that they're almost indistinguishable. Roddy's strength is reminiscent of Asheim, and the band even goes so far as to incorporate the mixed snarl and guttural vocals, though rarely in tandem...

Granted, Redemption is better produced than any of the four Deicide full lengths before it, and there are minute variations in how Soars approaches his riffing than the Hoffmans, but it's a bit difficult to imagine that the interest this band buzzed up was not directly related to such a stark similarity (and the association with Malevolent Creation). Nonetheless, Divine Empire were able to launch themselves onto a number of successful tours at the turn of the century, and if anything, Redemption makes apparent that the hungry trio had many of the necessary tools to make a name for themselves in an already over saturated genre. The debut starts off with its strongest individual track, "Hidden Hatred", noted for the writhing cysts of speed wrought below the verse, which hint at appreciable malice. Then again, I could live without the hyper grooving mosh sequence, but its brief enough before the band surges once again into a taut velocity.

After this, the album is somewhat of a mixed bag, suffering the same setbacks as a Serpents of the Light, In Cold Blood, or Stillborn: dull and predictable patterns. Here, such are given some strength through the presence of the living tempest Roddy, the sharp and snagging explosions of lead guitar, and the professional punctuality of the studio delivery. But I will be damned if I can remember anything more than 2-3 riffs off the album: the aforementioned in "Hidden Hatred", the brute thrash sequence embedded in "Criminal Instinct", and the Pestilence-inspired intro to closer "Pray for Deliverance". The remainder of the tunes, despite the obvious competence in their application, seem rather effortless in their composition, more of muscle than creativity. If you're completely in heat for the sounds of Hate Eternal, Morbid Angel, Deicide, Diabolic, Malevolent Creation, Naphobia and so forth, then you'd hardly find this debut offensive, but for my ears, its too long on punishment, not short on shrift. Pedestrian this isn't, but to be honest, the cover is a lot more evil than the majority of the music.