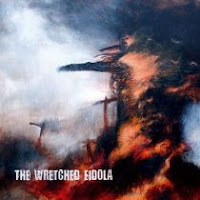 2008 saw the release of The God We Drowned, a promising if futile and unnoticed debut of Danish death metal falling between the poles of unquestionable brutality and melodic vigor. Not so surprising due to the band's relationship to another act, Compos Mentis, who also flit about the easy classifications. Three years later and we've got another wonderful album title, another work wrought of effort and high studio standards, but it ultimately falls short of its predecessor. This is largely the fault of the writing, which is dynamic, yet for the most part, wholly uninspiring, like a mesh of God Dethroned and Amon Amarth riffs with an underlying melodic canter that simply never stands out in the memory.

It starts off fairly strong with a churning, mosh-worthy intro in "06-07-09", glinted clean guitars ringing off against the sullen, grooving beat. Then "I Know the Taste of Your Tears" arrives, with a title far cooler than the pretty standard melo-death momentum of its ascending verse rhythm. This is unfortunately all too typical of the sophomore fare: songs like "Chronos", "The Craven's Work" and "Thieves, Whores and Heretics" all offer a half-decent guitar line that never quite pays off, a modicum of thrash, melody and groove that too quickly escapes the memory. Crocell are admittedly more brutal than your garden variety In Flames outfit, and songs like "The Age of Iron and Rust" and "The Purity Harlot" are suitably aggressive enough to appeal to those who are loathe to melodeath exposure, punishing through their mindless dynamics, but those 'money shot' riffs so important to the genre simply never arrive...

Vocalist Magnus Jørgensen (who is now also the frontman for veterans Panzerchrist) delivers the same mix of styles as he does through Regiment Ragnarok: average if acceptable gutturals infused with a few snarling breaks. They sound strong in the mix, as do the drums and the punch of the guitars, but sadly the production overtakes the songwriting in short order. If you're really, truly into the more weighted edge of the melodic death spectrum, i.e. the early Amon Amarth records, just about anything from Hatesphere, God Dethroned or Carnal Forge, then there is a possibility you might find something in this. Personally I thought The God We Drowned was stronger overall, from the compositional quality to the cover art.