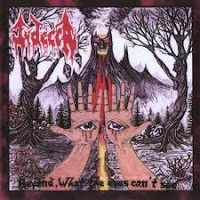 Not surprising that Judecca led a brief career, then their losses, as their earlier EP releases Scenes of an Obscure Death and Awakened by the Stench of the Dead played the law of averages rather closely. Then again, there was a particular, ominous atmosphere the band had been able to create through both their guttural decrepitude and lo fidelity sound standards. A particular charm, against all odds, that was not offensive to the brutal simpleton seeking a morbid mashing of his/her brains. Beyond, What the Eyes Can't See... is thus a fitting swansong which, while not elevating their status noticeably, channels these ironic strengths to a new height of ghastly gore.

The album consists of two tracks from the Awakened... EP (1993), including a longer version of "The Black Blood of Christ" and then seven that had not been released, and it too received a limited release through the now defunct Wild Rags label. You can expect lots of simplistic, grooving hooks slathered in the ominous, blunt vocals, interspersed with creepy and perverse samples. Despite the mere 25 minutes of its existence, through, it is by far their most substantial release, not exactly over in the blink of an eye and long enough to let the listener subdue himself to the primitive bludgeoning. A few tracks like "As We Fuck" and "Trauma Induced Coma" pick up the pace to some solid double-bass driven brutality, but the majority slog along with a lumbering, chugging gait that feels not unlike the early years of Amon (aka Deicide). Solid examples of this would be "May You Find Peace" or "The Undead". I do quite like the samples the band has included, especially for "The Stench of An Undouched Cunt" but I can't say that the composition itself lives up to the smutty introduction.

The extended version of "The Black Blood..." retains its doomed pace, and its arguably the most atmospheric and memorable track on the entire album, but even this still feels average when you've got such a wealth of better alternatives available in 1996. Judecca is definitely the sort of band that the obscure death enthusiast would stroke himself (or herself) to, but the sad fact is that they offer absolutely nothing new, and outside of the dense miasma of atmosphere created by the vocals and recording, and the promise of the samples, there is just not much to this. It's a better expenditure of time than either of the EPs, but that's primarily due to its longer length. It's better to reign in the underground than serve in the mainstream, but such royalty would evade this Florida cult throughout their limited duration.