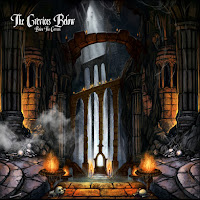 Being that I was highly smitten with Midnight Odyssey's 2009 demo full-length Firmament, I have naturally been anticipating the newest project from its creator, Australian Dis Pater. The Crevices Below provides a conceptual and diametric parallel to that other work: while Midnight Odyssey provides an emotionally draining, immensely consistent journey beyond our native sphere, this project attempts to drill below the surface of that very same world. Centered around a fantastical underground liege and his gradual spiral into madness, it explores feelings of isolation, loss, and the strange beauty of an alien environment: in this case, the desperation and depression of fighting off the lightless infinity of a crushing, hollow place.

Despite their polar opposition in thematic content, The Crevices Below & Midnight Odyssey do occupy the same niche of their genre, if not entirely. Droning, spacious guitars resonate along the echo of dour, narrative rasping, while synthesizers and percussive, programmed clamor used to imitate the natural subterranean environment, as if you were experiencing lost machinery, the clanging of rocks and metals, the dripping of underground streams. This is captured in six movements, one of which ("Below the Crevices") centers on larger swaths of ambient escalation, another upon pure keyboard instrumentation ("Whispers of Sorrow"), yet another on resonant dementia ("The Tomb of Subterranea"). My favorite chunk of the disc comes at the very climax, between the bleak, Gothic suburbs of "Trapped in Suicidal Depths" and the epic indictment that is "Carrying the Cries of the Lost"; 11 minutes of thundering melodic torment offset with sparse acoustic sequences.

There is more variation here than upon Firmament, which for all its brilliance was of a single, beautiful course. Dis Pater is exploring more clean vocals, and a more cohesive story arc to fuel the emotional undertow. There is still that same, predictable feeling here that dominated most of Midnight Odyssey's compositions, and yet the music is so unabashedly atmospheric that it no impediment to the sediment of sadness and atrophy. All told, I'm not sure I took away quite so much as with that album, which took me entirely by surprise, but it's still amazing. Redundant title aside, Below the Crevices is worth repeated exposure, especially if you can set the proper mood and environment to enjoy it on its own terms. I recommend an old basement, or if you're lucky enough to have a local cave network...go for it. Or just the dark recesses of your solitude, with a single candle lit to remind you of your humanity amidst the ominous oppression of callous, crushing stone.