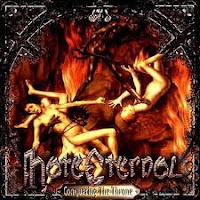 As a shambling, murderous constituent to Ripping Corpse he was a virtual unknown. As an axe wielding mercenary to Morbid Angel he had begun to build a name for himself as a talented fiend who could run alongside Trey Azagthoth in technical ability. As founder and front man for Hate Eternal, Erik Rutan had finally found his temple, performing the death metal as he always wanted to hear it: rapid, ribald and unapologetic. If most of the elements raped upon this debut seem ‘familiar’ to Rutan’s better known alma mater, then perhaps it could be forgiven. He took the accelerated side of Morbid Angel, slathered in brutal vocals akin to David Vincent, George Fisher and Steve Tucker, and peppered his spry lead sensibilities and beloved abuse of deep sliding octave chords to the resulting mass of affliction: Conquering the Throne, a head spinning triumph that makes Formulas Fatal to the Flesh seem more like baby formula.

There is simply no release from the blasting, churning momentum Rutan had drafted on his diabolical desk. To complete this ritual, he hired on some of the best in the business: relentless skingrinder Tim Yeung, Suffocation guitarist/alumni Doug Cerrito, and the late Jared Anderson on bass (who also performed a brief stint with Morbid Angel after the turn of the century). Rutan produced the album himself, and did a rather smashing job of it, with immense punctuation to the guitar tone and vocals, beneath which Yeung propels himself like a swarm of abyssal hornets. Conquering the Throne is one of those rare albums that succeed despite a lack of variation in their jerking, wretched intent. You might damn well consider this a 33 minute ululating omni-song chopped up with a cleaver into inoffensive 2-3 minute segments that each pack a comparable, lethal dose of flailing insanity.

As such, it’s a challenge to select individual favorites. I’d recommend just pummeling on through the whole lot, from the muscular showcase “Praise of the Almighty” to the well of frenetic malpractice that is “Saturated in Dejection”. There’s not much slowdown, the closest might be the curving malevolence of “By His Own Decree” or the bewildering juggernaut that is “Darkness by Oath”, and each of the tracks is kept incredibly busy with a large number of riffs, wailing and efficient leads, and drums that will have you selling your own kit on eBay in no time, since you know you will never play that good. As far as the faceless, unwashed USDM hordes are typically concerned, Hate Eternal is the whole package, a storm of unsubtle atrocities that hammer the audience into rapt submission.

Perfect? Decidedly not, but as far as answering any question that Rutan could strike out on his own, it’s a rousing success. I’ve already mentioned that the songs do lack some individual charisma, and the acrobatic fluency of the guitars very often breed little more than patterns familiar to Morbid Angel or Suffocation, only splayed out at ridiculous speeds. The lyrics follow that same egoist/occultist tradition, heavily centered on theology, that bands like Deicide and Morbid Angel had explored previously. For the ADD addled loud and proud only crowd, this is a sheer paradise of punishment. For the rest of us, we might make an exception to the general indifference towards faceless brutality for an album so finely chiseled to knock our blocks clean into the next century.