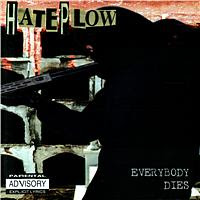 Hateplow was an outlet organized by several members of Florida's Malevolent Creation to wax their crude and callous opinions on prostitutes, drug addicts and the mentally handicapped. Signed to Pavement through their obvious association, they forged a parallel existence to that better known (and superior) group during a time when they were releasing some pretty average efforts (In Cold Blood, The Fine Art of Murder). One might hold on to some hope that Phil Fasciana had shuffled some of the inspirational writing that lacked from those albums over to this project, but Hateplow is surprisingly even more void of good ideas or memorable sequences. Everybody Dies has more of a grind and hardcore aesthetic surging through its crack star running shoes, with speed and intensity that rival what Phil's mainstay were recording at the time.

That aside, the music itself is simply too forgettable. "Everybody Dies" opens with a nice pulse of explosive grinding death dowsed in Kyle Symon's percussive gutturals, which carry an adequate resonance through the album, but nothing lurks deeper in the track except repetition and drab chugging breakdowns. A few of the tunes rely too closely on the bland moshing chug rhythms like "Stalker" and "Challenged", while others whittle away in unmemorable deathgrind brutality like "Ante Up" and "Denial". Often, the two will collide into a more dynamic series of blows, but aside from a small handful of riffs ("Prison Bitch" and the silly "Born with Both"), the album fully lacks distinction outside of its primitive lyrical mire. Drummer Larry Hawke, who sadly passed away after laying down his tracks, does offer a strong and taut performance, and the production of the debut is in fine shape: clean and effectively percussive. Otherwise there is just not enough of value to recommend this. Not even the potent cover of Cream's "Sunshine of Your Love" is worthy of redeeming the sum of these parts. Not for me I guess.