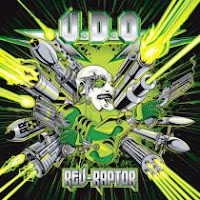 Let's have a show of hands for anyone who gives a damn about the new 'mascot' Udo has chosen for his solo career? Nobody? Count me entirely unsurprised. Udo Dirkschneider does not need a mascot, least of all some retarded icon redolent of an Insane Clown Posse paint job gone King Diamond on a bad hair day. Dirkschneider is a god among men, having fronted more great albums than Elvis Presley, Michael Jackson or Bruce Springsteen. Udo deserves tributes of wine, women and gold that he even lets us breathe the same air as he. So why, so late in his career was this unnecessary decision made? Needless to say, after viewing the covers for both this and the Leatherhead EP preview, I was worried...

Not that Dominator was an eye catcher, mind you, but the music at least lived up the legacy, for the most part. Rev-Raptor is perhaps the first case in many years in which the legend has begun to falter. There is nothing remotely terrible about this album, and it even manages a few decent anthems that the usual suspects will latch on to if they fancy Metal Heart, Animal House and all the guy's many classics, praised and unsung, but very few of the songs leave a lasting impression. "Fairytales of Victory" is your mid-paced Udo standard, pumping simplistic bass line glazed in cutting chords and a massive chorus. The slamming power of "Dr. Death", "Renegade" and "Terrorvision" are both quite effective, if nothing new for this band; and "Underworld" also has a huge set of balls that take you back to when every arena shaking Dirkschneider performance was the last thing you needed to witness before you could safely pass on from this world.

The rest of the album, is well...drab and uninteresting. In particular, the songs that were issued with the EP ("Leatherhead" and "Rock'N'Roll Soldiers") do nothing for me, solid but lacking in the fire and fun that made an album like Mastercutor so masterful despite itself. By this point it almost feels as if the guitar riffs are being recycled and paraphrased from Udo's own extensive backlog, so few times do they evoke anything compelling, and while these guys all play tight on both stage and in the studio, you get the feeling like they should attempt to stretch themselves more towards the limit. I mean, listen to the latest Accept album. Certainly they are trying to write with more intensity and intricacy, while Rev-Raptor sort of stagnates.

Dirkschneider can still deliver his lines with all the air raid torment of his youth, and as noted, there are several blockbusters here which stand aloft from their peers to get the head banging and the blood stirring in the listener's circulation, but overall, this is perhaps the lowest point for U.D.O. since Thunderball back in 2004. There's a song here called "I Give as Good as I Get", with THE MAN at the helm. How does that not just explode? Sad to say it doesn't (and that's one of the damned video/singles!) Not enough hooks, it just attempts to sail along on its own precedents, and in my opinion, that's just never enough for guys like Stefan Kaufmann and Udo Dirkschneider who have been my heroes for a damned eternity. Rev-Raptor isn't as bad as it might have been with that gaudy derelict of the mascot parade featured front and center, but neither is it worth remembering.